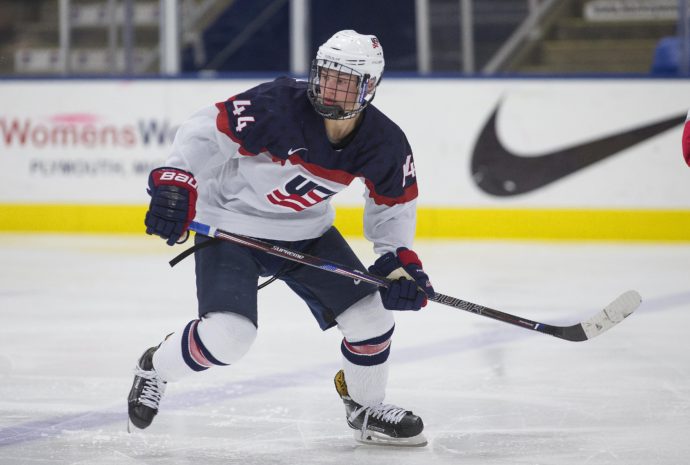 Farabee is an cerebral three-zone playmaker who consistently adheres to textbook fundamentals in addition to being one of the most lethal scorers in his draft class. He can tailor his style to fit any game — wide open, slogging matches, physical…it simply does not matter. Farabee is a top-line winger for the NTDP and he plays that role in every situation no matter the score or time on the clock. He’s very quick in open ice and possesses a devastating change of pace that catches defenders flat footed, and he’ll use a rapier-like inside shift inside if taking the puck wide isn’t the preferred route. One thing you notice instantly is his work ethic on the ice — Farabee has a nonstop motor and will bust it from start to finish on every shift. He’s a wiry kid, but his balance is stromng and he can endure a physical beating, plus ward off thicker defenders as he bulls his way to the cage. Even at 17-years-old, Farabee already own a pro-quality shot for its accuracy, velocity and release. Compounding matters for opposing goalies is that he’s as proficient with his backhand as he is on the forehand. Easily one of the top forwards among his draft-eligible peers and a kid with star potential.

#NTDP: C/W Joel Farabee (Ranked No. 18) shows some silky mitts to finish, but Bodie Wilde smothered 2-on-1 & took it coast to coast. pic.twitter.com/Xv3NLf6pAr