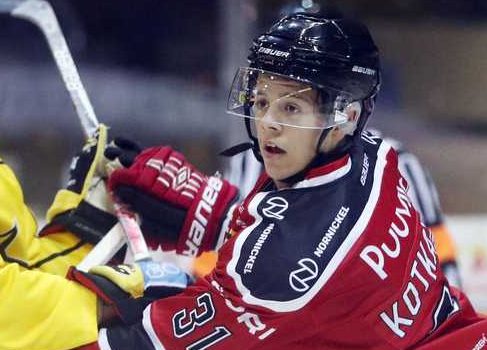 Alert and versatile forward with good speed and a wide range of attributes who has performed well beyond expectations as a 17-year-old playing key minutes in Finland’s top league. Kotkaniemi comes across as a smart, clean player with or without the puck and can play either center or wing. He is used on the penalty kill and in late-game situations, showing defensive prowess regardless of the job he’s assigned. He has a nose for sniffing out opposing intentions, and his quick hands and keen vision can turn a run-of-the-mill enemy breakout into a quality chance for him or his mates. One skill that stands out is his playmaking ability — Kotkaniemi is quite creative with the puck and threads the needle with ease. Kotkaniemi is a central figure on the power play, where he likes to control the puck along the wall and look for backdoor cutters or point men open in the high slot. Although he comes across as a playmaker rather than a finisher, Kotkaniemi has an excellent shot/release combination and can corral a puck in traffic and still wire it on net. He makes up for an average first step with excellent awareness and anticipation, and he’s difficult to knock off the puck once he maintains control. Strong on his skates and heavily involved in puck battles, Kotkaniemi is highly reliable on odd-man rushes but also nimble enough to cut sharply across the grain and throw defenders into a state of confusion.

#Hlinka: Kupari putting on a show. Speeds down the wing and lays it flat for Jesperi Kotkaniemi to slam home. 4-1 Finns pic.twitter.com/9shTtAg1Pb