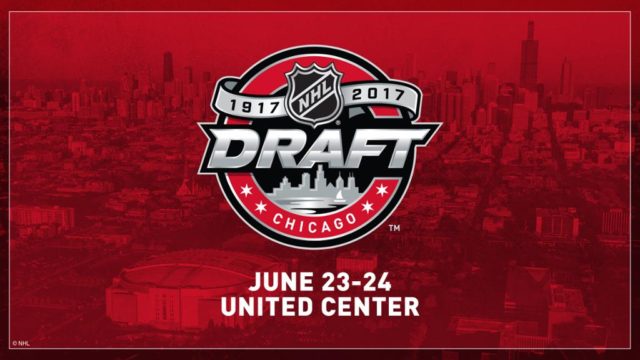 New York (The Draft Analyst) — Whether it’s Draft Day, the trade deadline or the beginning of the unrestricted free agency period, history shows us that it takes usually one move to trigger a flurry of activity. The 2017 NHL draft, which takes place in Chicago on June 23-24, is less than two months away, and the lack of movement involving first round picks could mean NHL general managers are waiting for the first domino to fall rather than commit themselves to a pick in a draft many consider to be thinner than previous years.

Twenty eight of the league’s 31 teams — including all 15 from the draft lottery — still hold their 2017 first rounder, with the Minnesota Wild, St. Louis Blues and Anaheim Ducks trading their for veteran help during this past trade deadline. The New York Rangers are expected to make a pick on Day One for the first time since 2012, while both the Los Angeles Kings and Pittsburgh Penguins rejoin the festivities after spending the last two opening nights as mere onlookers.

There are several factors for this sort of draft pick tight-fistedness, beginning with the salary cap failing to climb significantly. In fact, the $1.6 million jump from 2015-16 to 2016-17 was the lowest in six years. The effect trickles down to player contracts, and more GMs are giving jobs previously guaranteed to pricey veterans to younger, cheaper players. For some, this strategy actually paid off.

Is there a down side to the league getting younger and faster? For one, more young stars are going to hit unrestricted free agency smack in the middle of their primes — somewhere between 26-28. This in turn will force GMs to give long-term deals to their franchise-carrying youngsters sooner than later, thus tightening the wiggle room to sign impending veterans about to hit the UFA market. But experienced players, some who many consider to be the life blood of Stanley Cup contending teams, are slowly getting phased out and being replaced by cheaper prospects just one or two years removed from getting drafted. It seems as if 30 is the new 40, and while veteran teams like Ottawa, Pittsburgh and Anaheim are within striking distance of a Stanley Cup, the average age of playoff teams, buoyed by upstart teams in Edmonton and Toronto, shrunk from previous years.

The Edmonton and Toronto models are spearheaded by respective cornerstone young stars in Connor McDavid and Auston Matthews — each selected first overall in their draft year. The 2017 draft crop does not offer a building block similar to McDavid or Matthews, and while consensus top prospects Nolan Patrick or Nico Hischier are both certainly talented, neither is likely to have an immediate impact similar to previous first overall picks. That will not, however, stop front office types and scouting departments from looking for players with the shortest path — either physically or developmentally — to the NHL. Last year’s draft in Buffalo saw nearly 50 players selected within their second, third, and even fourth year of draft eligibility. This is no coincidence, as draft “overagers” give an organization a product with more polish at the expense of losing two or three years from a contractual point of view.

With any NHL draft, one should expect the unexpected. Still, teams seem to be leaning towards playing it safe, avoiding trades involving megastars until after July 1, and showing faith in the first round pick awarded to them off their regular season finish. That doesn’t mean we’ll be subjected to a boring opening night of the draft.