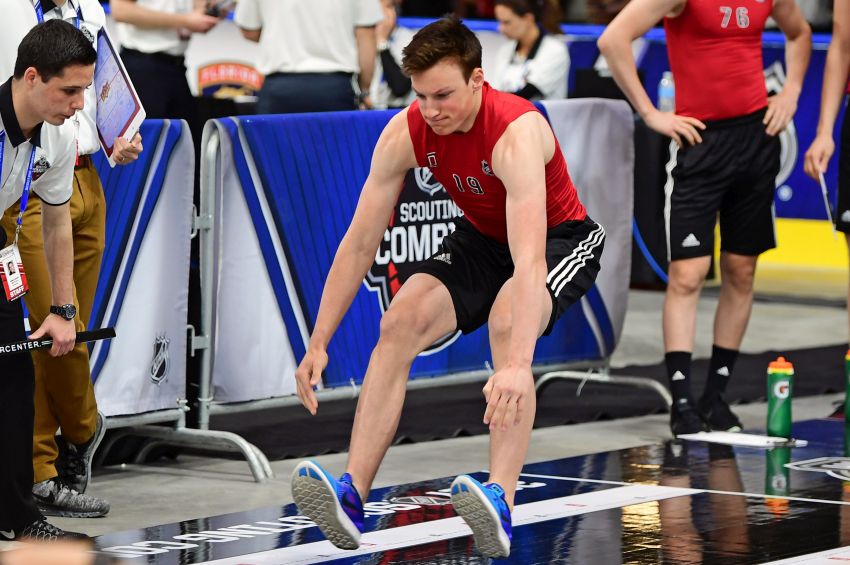 The Draft Analyst (New York) — Although the 2017 NHL Entry Draft is not expected to provide a ready-made superstar in the mold of Mario Lemieux, Sidney Crosby or Connor McDavid, talent evaluators and front office executive gathered in Buffalo beginning last week to finalize player assessments for over a hundred top draft prospects. Running a gauntlet of physical fitness tests and team interviews, the players competed against one another to help solidify or improve upon impressions made based on their play on the ice. A total of 14 individual event stations encompassed the physical portion, which included tests involving  pull-ups, wing-span measurements, standing long jump and a bench press.

Most of the media attention was directed towards two prospects — centers Nolan Patrick and Nico Hischier — considered by many to be the first two picks when the draft convenes in Chicago on June 23. While neither are expected to become instant stars, it was Patrick’s season-long struggle with injuries that had some question whether he was the same lock for first overall as he was when the season began. Patrick, who admitted he dealt with two sports hernia injuries before and during this past season, was medically cleared to participate in the fitness testing. He finished 14th with 11 pull-ups and 20th in the bench press but failed to crack the top 25 in the remaining 12 events. Hischier placed within the top 25 in four events — Pro Agility Right (13th), Peak Power Output (13th), Standing Long Jump (24th) and an impressive second place with 13 consecutive pull-ups.

It appears most the remaining top rated prospects did not perform as well in the physical stations. Green Bay Gambler Casey Mittelstadt, for example, is pegged by many to be a Top 5 pick, but failed to do one pull-up and managed a single bench press. Fellow USHL’er Eeli Tolvanen is also expected to get drafted within or near the lottery, but couldn’t crack the Top 25 in a single event. Meanwhile, Klim Kostin, the Russian power forward who was a preseason top pick but missed the second half with a shoulder injury, tied for 17th in the pull-ups with 17.

Several players knocked it out of the park in Buffalo. Team USA center Josh Norris led all competitors by placing within the Top 5 in six events, winning five outright. Teammate Scott Reedy, who needed a strong combine after getting benched at the under-18 world championship, tied with Norris,  USHL defensemen Mario Ferraro, and WHL overager Morgan Geekie for the most Top 10 finishes with seven. Finnish blueliner Juuso Valimaki, also a possible lottery pick, led all prospects with 11 Top 25 finishes, while Ferraro and Geekie came in second with apiece.

Below are tables listing all 14 events and the participants that placed in the Top 25, preceded by listing the total individual placement within the Top 25, Top 10 and Top 5.