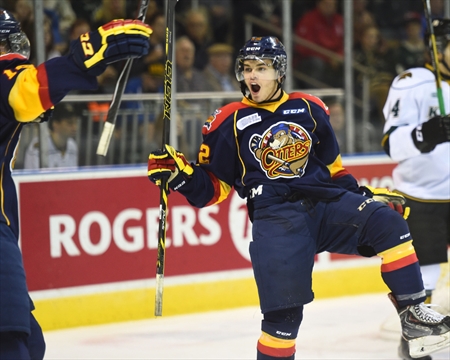 Position: Right Wing/Center
Shoots: Right
Height/Weight: 5’7 160 lbs
Born: December 18, 1997, Detroit, MI
Obtained: Signed with the Erie Otters (OHL) in April, 2014
Notes: 2015-16: Tied for second in the OHL with 51 goals while finishing eighth in scoring with 101 points in 60 games…Led the league with 11 “first goals”, placed second with 10 game-winning tallies, and finished third with 269 shots…Won 53% (97-183) of his faceoffs…Was second in team playoff scoring with eight goals and 11 assists for 19 points in 13 games…Scored a goal in five games as Team USA won the bronze medal at the 2016 IIHF under-20 world junior championship…Played for Team Cherry at the 2016 CHL Top Prospects Game…Was named to 2015 USA Hockey All-American Prospects Game, where he was on Team Plante’s top line along with C Clayton Keller and LW Kieffer Bellows…Scored Otters-record five goals at Niagara on October 1st, then added a four-goal game against the Ice Dogs eight days later…Named OHL Player of the Week on October 5th…2014-15 Named both CHL and OHL Rookie of the Year after leading all first-year-players with 51 goals and 104 points…Also named to OHL 2nd All-Star Team…Had highest points-per-game average among all 16 year olds in the CHL (1.53)…2013-14: Was invited to USA Hockey’s Select 16 Festival, where he scored a hat trick in the title game…Drafted by the Waterloo Black Hawks in the second round (27th overall) in the 2013 USHL Futures Draft…Signed letter of intent to the University of Massachusetts-Amherst before signing with Erie.

The elephant in the room. You simply can’t avoid talking about Erie Otters superstar winger Alex DeBrincat without a mention of how tall he is. And while the professional leagues are inclined to take a chance on undersized skill forwards far more than they used to, even widespread agreement on just how darn good this kid is may still prevent him from being ranked where we think he would be if he was a bit taller than 5’7. Regardless, the Michigan native has done a pretty good job silencing critics who at first said he was too small for both the U.S. National Team Development Program (he was cut from the U17 squad) and the OHL (was passed over in two OHL Priority Selections). Today, DeBrincat is the Canadian Hockey League’s most prolific goal scorer, and there is nothing anyone can point towards to successfully argue that. Blessed with the softest yet quickest set of hands of any 2016 draft eligible, he continues to find ways to make up for the difference in size by identifying the correct time to shift gears and elude coverage. His release is devastatingly rapid, and can even wire off a shot if the pass is behind him or in his skates. DeBrincat may be small by hockey standards, but he’s a tenacious battler who will get into those tough areas around the cage, as well as throw a hit without deviating from his primary objective of scoring goals. He thinks the game at a very high level, and is the last guy you would catch taking a shift off. You could even classify him as a glutton for punishment because he seemingly thrives when futile attempts are made to bruise and batter him into submission. DeBrincat is the ultimate competitor, but it’s been so long since he’s slumped, you have to wonder how he handles it at the next level, and against bigger, smarter opponents no less. But at this rate, he’s certainly worth the risk, even in the later stages of the first round of next June’s Entry Draft.