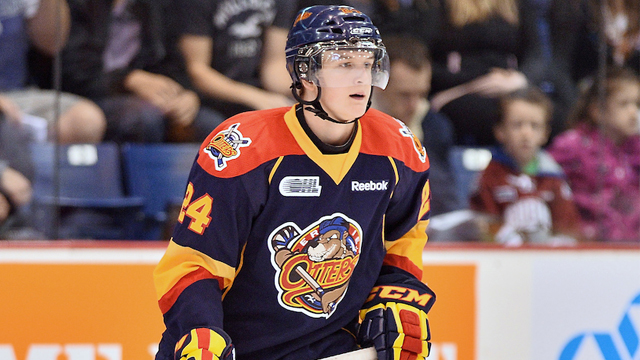 Erie’s Darren Raddysh was one of the top point producers among CHL defensemen (Photo: OHL Images)

The Draft Analyst (New York) — Another Canadian major junior regular season has come and gone, and with the playoffs just a few days away, let’s take a quick breather and dig into the players who from a traditional standpoint produced impressive stats. This is the first in a series of reviews where we rank the leaders into categories, beginning today with Canadian Hockey League skaters. Subsequent posts will get into goalies and first-year draft eligibles before culminating with analytics leaders, courtesy of prospect-stats.com. Today we’ll feature the top players — drafted, undrafted or soon-to-be-drafted — who as you’ll see either performed above expectation or finished exactly where we thought they would.

You can’t say enough about Regina center Sam Steel, a late first-round selection of Anaheim last June. Steel is our pick for CHL Player of the Year (Mitch Marner and Connor McDavid were the previous two winners), and the staggering numbers speak for themselves. He recorded 81 assists and 131 points in just 66 games — a 61-point increase from his 2016 draft year! And with all due respect to Erie winger Alex DeBrincat — a Chicago Blackhawks prospect and the CHL’s top goal scorer with 65 — there isn’t a player in junior hockey who contributes more to his team than Steel, who wasn’t even considered the top center on his team, let alone the WHL. Neither DeBrincat, Steel nor QMJHL scoring leader and Columbus Blue Jackets pick Vitalii Abramov are players with size, as all three are listed under six feet tall. Still, the dual shoot-pass threat they present to opposing coaches is just one of the many reasons they are among the elite of hockey’s top prospects.

On defense, Quebec League rearguard Samuel Girard, a second round pick of Nashville in 2016, dished out a QMJHL-best 66 helpers after placing third a season ago. Like the three aforementioned forwards, Girard is on the smaller side at a listed 5’9. But his ability to distribute the puck and quarterback a power play is second to none among current CHLers. From a statistical standpoint, the Ontario Hockey League lost to promotion point producers such as Travis Dermott, Jakob Chychrun and Rasmus Andersson, allowing Erie’s undrafted overager Darren Raddysh to shine as the circuit’s top defender. Raddysh led all CHL defensemen in points-per-game average (1.29).

No review would be complete without mentioning draft prospects, beginning with Halifax center and Swiss phenom Nico Hischier, who topped all CHL rookies with a 1.51 points per game. Both Hischier and Finnish pivot Aleksi Heponiemi from the WHL’s Swift Current Broncos shared the CHL rookie scoring crown with 86 points apiece and are first-year draft eligibles for 2017, with Hischier expected to be one of the first players picked in the opening round.

*Stats presented are neither final nor official. Any changes made by the leagues will reflect once identified.