NHL Rookie of the Month (November)

Rookie of the Month (Nov.) 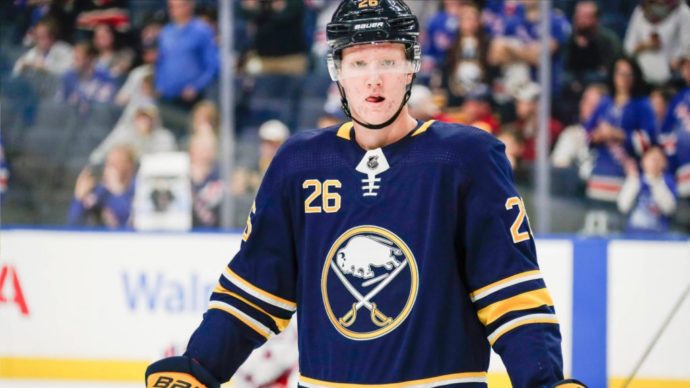 NASHVILLE (The Draft Analyst) — Rasmus Dahlin is making history a lot faster than we expected.

The flashy defenseman, who was the first pick in the 2018 NHL Draft, played a pivotal role in the Buffalo Sabres’ 10-game winning streak by leading all rookie rearguards in November scoring with 10 points (1 goal, 9 assists) in 14 games. For that, Dahlin was named our Rookie of the Month for November.

There was talk around last year’s draft season that Dahlin at the age of 17 was good enough to warrant comparisons to legendary NHL defensemen like Phil Housley, Brian Leech and yes, even the great Bobby Orr. Although there may be differences in style, Dahlin’s recent play has made those prognosticators look a lot smarter. Dahlin joined the aforementioned Orr and Housley as the only 18-year-old defensemen in NHL history to record 10 points in one of the first two months of their respective rookie seasons. While Dahlin still has a ways to go to try and replicate their hall-of-fame careers, the youngster’s rare mix of grace, creativity and cerebral play make him the ideal candidate to dominate the league for many years to come.

Rasmus Dahlin (Buffalo): It’s no coincidence that the Sabres’ winning 10 straight games happened around the same time Dahlin solidified his role as one of Buffalo’s top-four defenders. His ice time has hovered around 20 minutes per game and he is playing a prominent role on a Sabres’ attack that through Friday was ranked seventh in even-strength goals scored. Buffalo was dead last in the league in the same category a season ago. Dahlin closed out his impressive 30-day period with a four-game assist streak between Nov. 21-27.

Rasmus Dahlin (14gp-1g-9a-10pts) is just the third 18-year-old defenseman in NHL history to score at least 10 points in one of his first 2 rookie months.

Miro Heiskanen (Dallas): The minute-eating blue liner leads all first-year players with nearly 23 minutes of ice time per game. He was second only to Dahlin in November defense scoring with two goals and five assists for seven points in 15 games.

Elias Pettersson (Vancouver): Our October Rookie of the Month sure made it difficult for us to not bestow the honor upon on for a second time. Pettersson posted a rookie-best 12 points (6 goals, 6 assists) in 14 games, with eight of those points coming at even strength. As impressive as Dahlin’s season has been thus far, Vancouver’s 2017 first-round pick is the league’s top first-year goal scorer and point producer, and is the Calder Trophy frontrunner for NHL Rookie of the Year.

Ten goals in 10 games. And Elias Pettersson still has 2+ periods to go in this one.

Brady Tkachuk (Ottawa): All things considered, a strong argument can be made that Tkachuk, the fourth overall pick in the 2018 draft, was November’s most complete rookie performer. His six goals and eight even-strength points in 11 games tied Pettersson for the most by an NHL newcomer. He also ranked first among qualified rookies in even-strength goals-per-60 minutes (2.08) and second in points-per-60 minutes (3.33)

Cal Petersen (Los Angeles): Signs may point for the Kings’ dreadful season to continue on its disastrous course until April, but injuries to Jonathan Quick and Jack Campbell opened the door for Petersen to shine. The Notre Dame product, who was originally drafted by Buffalo in 2013 but signed with the Kings as a free agent, posted a respectable 4-4-0 record with a sparkling .929 save percentage.

Colin White (Ottawa): White’s reputation has a clutch player continues to strengthen, as six of his 10 November points either tied the score or gave the Senators the lead. He recorded 10 points (5 goals, 5 assists) last month and is tied with teammate Brady Tkachuk for second in overall rookie scoring with 16 points.

Jesperi Kotkaniemi (Montreal): The third overall pick in 2018, Kotkaniemi had three multi-point performances in November and tallied seven of his eight points at even strength. His 2.60 points-per-60 minutes average at 5v5 was good for fifth among rookies.