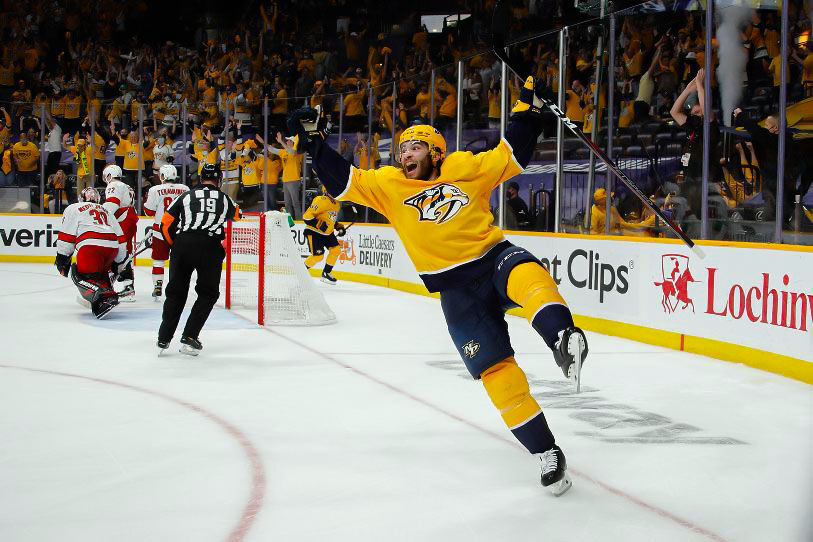 Summary: Back-and-forth series with four one-goal games, two decided in overtime, and each team winning on the road…Penguins dropped Games 4 and 5 but oddsmakers still see them as the favorite to win Game 6 and push the series to a winner-take-all Game 7 on Friday, May 28…Pens’ deadline acquisition Jeff Carter has been clutch (3 goals in two wins) but captain and leading scorer Sidney Crosby has only one goal and one assist in the five games…Islanders lost both games started by No. 1 Semyon Varlamov but grabbed three wins with backup Ilya Sorokin in net, including a stellar 48-save effort in a 3-2 overtime win in Game 5…There have been 20 different goal scorers through the first five games but none are named Mathew Barzal, as the Isles’ top point-producer has been held to only three assists (two on the power play) in five games…Penguins’ netminder Tristan Jarry has started all five games but has surrendered four goals in three of them and his -3.5 GSAA (goals saved above average) is 19th of the 21 goalies who have appeared in this postseason.

Background: The high-powered Penguins won’t be the first team you’d think of to validate the “defense wins championships” maxim, especially since they iced the 18th and 17th ranked defenses in their Stanley Cup years of 2009 and 2017, respectively. Scoring goals at feverish clip is what Pittsburgh usually does best (they ranked second in goals for and fourth on the power play in the regular season), but nobody has yielded less goals in the last three years than Barry Trotz’s Islanders, who have held the Penguins to three goals or less in four of the first five games of this series

Outlook: Monday night’s 3-2 overtime defeat at the PPG Paints Arena dropped the Penguins to 3-9 in their last 12 home playoff games and were held to three goals or less in all of them. The series shifts to Uniondale for Game 6 on Wednesday, May 26.

Summary: First three games were decided in overtime, but the early Game 1 injury to Caps’ starter Vitek Vanecek forced them to turn to 40-year-old Craig Andersen and rookie Ilya Samsonov for the rest of the series…Washington lost Games 2 and 3 in overtime after blowing third-period leads…Tuukka Rask was phenomenal after the Game 1 loss, stopping 130 of 137 shots for a gaudy .949 save percentage…Boston’s “Perfection Line” of Brad Marchand, Patrice Bergeron, and David Pastrnak scored  eight of the Bruins’ final 13 goals…Taylor Hall has three points (2 goals, 1 assist) in five games, including a pivotal equalizer late in Game 2 that forced overtime…Alexander Ovechkin registered at least one point in each of the last four games, but Washington’s pricey forward quartet of Tom Wilson, Nicklas Backstrom, Anthony Mantha, and Evgeny Kuznetsov combined for only one goal the entire series.

Background: The Capitals may have won the Stanley Cup in 2018, but their postseason play since has been nightmarish. They entered the series with Boston with the league’s fifth-best offense and third-best power play but were riding a playoff schneid that saw them lose in Round 1 in consecutive years and muster two goals or less in 10 of their previous 13 postseason matches. The Bruins, who lost the 2019 Stanley Cup Final in seven games to St. Louis, were known to stifle opposing offenses, ranking top five in goals against in each of the last four seasons.

Outlook: The weary Bruins get to sit back and rest as they watch the grueling Islanders-Penguins series, which can be decided as late as Wednesday, May 26. They did receive two blows to the defense corps with injuries to Jeremy Lauzon (Game 1) and Kevan Miller (Game 4). Capitals were eliminated in the first round for a third consecutive season and also traded away their 2021 first-round pick to Detroit for Mantha. Head coach Peter Laviolette has only been there for one season, which puts the spotlight on general manager Brian MacLellan, who was hired in May of 2014 but has seen his teams ousted before the conference final in six of his seven season. The Capitals are pressed tightly against the salary cap and their lone notable unrestricted free agent is Ovechkin, who turns 36 in September and carried a salary-cap hit of $9.5 million.

Summary: A home-ice series with each team claiming victories in the two games in their own rink….Hurricanes raced to a 2-0 series lead with convincing victories of 5-2 and 2-0, but the Predators at Bridgestone Arena rallied for a pair of double-overtime victories in Games 3 and 4, backed by the goaltending of Juuse Saros (110 saves)… Nashville’s notable veterans were collectively inconsistent during the regular season, but nine of the 11 goals scored by the Preds in this series involved at least one of their five highest-paid players…Carolina’s defense suffered a blow in Game 1 by losing top-pairing blueliner Jaccob Slavin to a lower-body injury…After Brett Pesce (1 goal, 3 assists), Canes’ defenders have combined for only one assist in the first four games…

Background: Carolina finished with the league’s second-best record and deservedly so — they ranked in the top 10 in goals against (4th), power play (2nd), and penalty kill (3rd), while Nashville’s special teams placed 23rd with the man advantage and 29th on the penalty kill. But the opposite has rang true during the second season, as the Hurricanes through four games are only 2-for-14 with the power play

Outlook: The series returns to Raleigh for Game 5 on Tuesday night, and it’s reported that Slavin will be in the lineup. The Predators were without veteran forward Viktor Arvidsson in each of the last two games as he is day-to-day with an upper-body injury.

Summary: The Battle of Florida has lived up to expectations in the skill and physicality departments, with the Lightning and Panthers combining for 7.4 goals and 38.8 penalty minutes through five games…Florida’s Jonathan Huberdeau is the league’s leading playoff scorer with 10 points (2 goals, 8 assists) in five games through May 24…Tampa Bay has stuck with No. 1 goalie Andrei Vasilevskiy for all five games, although the three-time Vezina Trophy finalist is sporting a -0.90 GSAA after posting a +21.0 mark in the regular season…Nikita Kucherov all of 2020-21 with an injury but has been one of the league’s top scorers in the playoffs. The 2018-19 Hart Trophy leads the Lightning with 9 points (3 goals, 6 assists) while averaging 19:33 a game…Tampa’s Brayden Point has been held off the scoresheet after he registered 3 goals and 2 assists in Games 1-3…Florida has used three goalies in the series but likely stick with 2019 first-round pick Spencer Knight, whose 36-save performance in Game 5 helped the Panthers to a 4-1 triumph and avoid elimination. Knight is the second-youngest goalie in league history to win his postseason debut and at 20 is the youngest to do so in an elimination game…

Background: The Panthers (1st) and the Lightning (9th) were among the league’s highest shot-producing teams during the regular season. So it shouldn’t be a surprise that they’re combining for over 72 shots a game in the series. What is shocking is that Tampa Bay is allowing 11.3 shots more per game in the postseason (39.6) than it did over 56 games in the regular season (28.3).

Outlook: Game 6 is scheduled for Wednesday, May 26 at 7:30 p.m. EDT in Tampa Bay, where the Panthers are 3-2-1 between the regular season and playoffs. The Lightning are 10-5-1 following a loss since the start of the 2020-21 season and have gone 30 consecutive postseason games without back-to-back defeats.