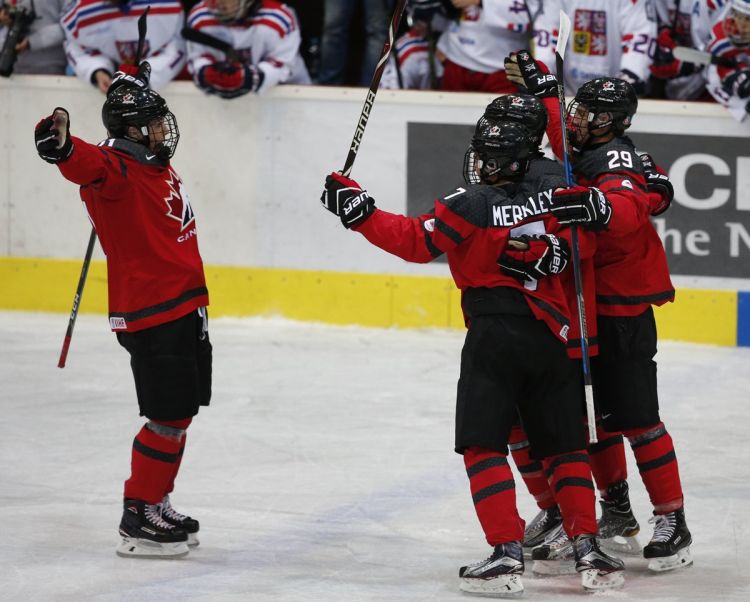 1. Canada (Gold): A shootout loss in the opener to the Russians didn’t deter this buzzsaw of a roster from slicing through the rest of the competition like a hot knife through butter, as Canada won its last four games by a 19-4 margin, including a convincing 4-1 win over the defending-champion Czechs in the title game. The center of gravity for this squad heading into the tournament was a loaded defense corps, so it came as no surprise that all three pairings were consistently efficient in moving the puck with both rapidity and poise. What did come as a surprise was the ability of the forwards — led by Saint John star C Joseph Veleno — to put relentless pressure on a bunch of normally sure-handed European puck movers. This forced the ice to tilt in favor of Canada, which scored most of its goals from dirty work and plays in front of the net. Hulking C Jack McBain did an outstanding job on Veleno’s flank all Hlinka long, using his size, strength and smarts to create chances for what turned out to be Canada’s top line. LHD Ty Smith was clearly the best blueliner of a talented corps, and speedy RHD Ryan Merkley on occasion showed flashes that he can dominate shifts and create like a finesse forward.

2. Czech Republic (Silver): The defending champs and hosts should hold their heads high after producing a solid performance for the second year in a row. Led by the goaltending of Lukas Dostal, and the dynamic play of forwards C Jakub Lauko and LW Jan Jenik, the Czechs scored a big 2-1 win over Russia in the semis before running out of gas against Canada in the final. They presented a balanced attack, with Jenik and his tournament-leading six goals on one line, and the explosive Lauko leading the way on the first. The Czechs have earned one gold, two silvers and a bronze in the last five years after finishing no higher than fourth the previous seven.

3. Sweden (Bronze): A perfect preliminary round with convincing wins against both the United States and the Czech Republic made picking the Swedes as the tournament winner a no-brainer. This looked pretty good for them in the semis against Canada, where the two nations were deadlocked at one in the third period. A defensive breakdown, however, led to Serron Noel’s go-ahead goal, thus ending Sweden’s hopes for its first Hlinka title since 2007. The Swedes showed resiliency in the third-place game against Russia, rallying from an early 2-0 hole and surviving a late tying goal to win it in overtime. Their best player undoubtedly was RHD Adam Boqvist, a brilliant puck mover with dynamic skills and the ability to shine in all three zones. He led all defenders in scoring with a goal and seven assists in five games. Up front, they received solid contributions from big two-way center Jacob Olofsson, and center Jonatan Berggren, and winger Lukas Wernblom netted  three goals apiece.

#Hlinka: Swedes rallied from 2-0 down to take a 3-2 lead, saw Russia tie it late, then won in OT. This is another beauty from Adam Boqvist pic.twitter.com/vSwpOkHfFV

4. Russia: You would think that the team with the tournament’s best player and arguably its best goalie would fare better than fourth place. But such is life in a competition like the Hlinka, where a perfect preliminary round means bupkis if you lose the first game thereafter. The Russians were somewhat shorthanded without top 2018 draft prospects Andrei Svechnikov and Alexander Khovanov, and later lost puck mover Danila Galenyuk and sniper Grigori Denisenko after the 4-3 shootout win against Canada. But excitable LW Dmitry Zavgorodny certainly helped make up for it, netting a tournament-best 10 points in five games. In goal, Amir Miftakhov was outstanding in the face of 121 shots over four starts, including 14 during a frantic 2nd period in the semifinal loss to the Czechs.

#Hlinka: It took LW Dmitry Zavgorodny all but 18 seconds to do this vs Sweden. Tied for most goals (5) and led tournament with 10 pts in 5gp pic.twitter.com/3Pn1OJmpmm

5. United States: It’s sort of a knee-jerk reaction to label the sluggish start from a 7-3 loss to the Swedes as the root cause of Team USA’s failure at this year’s tournament. But let’s be frank — this year’s roster simply didn’t stack up to the one that last year nearly came home with gold. With the poor chemistry excuse out the window, the biggest problem for the Americans was a defense corps that had sever puck-managment issues and struggled dealing with an aggressive forecheck. Compounding issues were the lack of scoring depth as two player — centers Jack Drury and Curtis Hall — accounted for 50 percent of the goal scoring. Drury easily was Team USA’s best player, anchoring the top line, and both the top power play and penalty killing units.  LHD Christian Krygier and LHD Slava Demin showed flashes of skill, speed and making the proper reads, and G Ben Kraws stopped 45 of 49 shots to win each of his two starts.

6. Finland: Opening any tournament with a convincing win in a short tournament generally leads to medal-round success. So you weren’t at fault if on Monday the Finns’ 6-1 rout of Slovakia gave you a warm and fuzzy on their title chances. Nonetheless, Finland proved us wrong, as it lost its final three games by a 12-5 margin. There were some bright spots, however, beginning with sublime multi-tooled C Rasmus Kupari, who tied for third in Hlinka scoring with seven points in four games. C/W Jesperi Kotkaniemi didn’t produce as much as his fellow 2018 draft blue-chipper, and over-passing the puck didn’t stop him from earning a respectable 2-1-3 aggregate in four games. Swift-skating LHD Toni Utunen led Finland’s defensemen with three points, and his puck-distributing skills were on display, especially off the rush.

7. Switzerland: Moral vistories can help at times, so the perennially overmatch Swiss, who finished last in their group for the third straight year, should find solace in the fact they yielded only 13 goals in four games — their lowest goals-against total at the Hlinka in years. Top defenseman and future Oshawa General LHD Nico Gross anchored a decent defense corps that rebounded from a blowout loss in their opener versus the Czechs with seven goals against over their final three games. The Swiss up front lacked punch, but C Sandro Schmid and C Valentin Nussbauer showed promise as two-way pivots who also handled power play time and critical faceoffs. But the real gem for Switzerland was G Akira Schmid, who followed up a near-upset of the Americans with a 23-save performance in a 2-1 win over the Slovaks.

8. Slovakia: To say the Slovaks had a disappointing tournament would be an understatement, especually when you consider they were playing in front of a home crowd in Bratislava. Slovakia was blown out in all three prelimiary games and bowed out to the Swiss in the 7th/8th place game. It wasn’t easy finding a silver lining or two from such an abysmal performance, but several players managed to stand out. RHD Oliver Turan was the team’s top defender and played in all situations with relative success, especially when handling an aggressive forecheck. Fellow rearguard LHD Martin Bucko has a howtizer for a shot and ran the point on the power play, but he paid dearly for his defensive shortcomings. Lastly, forwards C Kristian Kovacik and C Oliver Minko were the Slovaks’ most consistent threats.