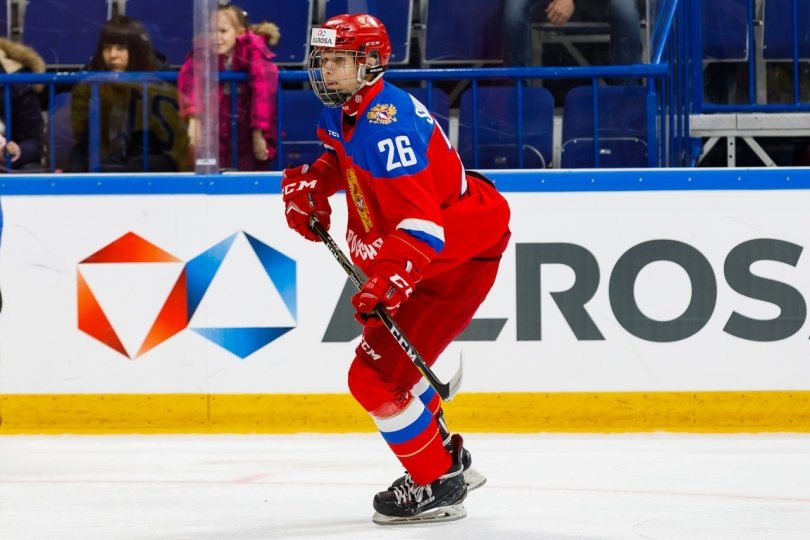 NASHVILLE (The Draft Analyst) — The MHL — Russia’s premier junior hockey league – returns to action on Sep. 5 after its previous season was cut short by the COVID-19 pandemic. This year, the league will look a little different with the addition of a new team in Mikhailov Academy, which will be joining the Western Conference. The MHL also broke away from the Ust-Kamenogorsk, Astana and ORG Junior organizations, which will not participate the season.

From a prospect standpoint, the MHL looks to have a fairly strong crop of first-year eligibles and additional noteworthy players from multiple positions who will be available for the 2021 NHL Entry Draft. Prokhor Poltapov (LW, Krasnaya Armiya), Daniil Lazutin (C, SKA-1946), and Nikita Chibrikov (RW, SKA-1946) lead the way up front, while Vladislav Lukashevich (D, Loko Yaroslavl) and Kirill Kirsanov (SKA-1946) are jockeying for the top spot among the MHL’s premier draft-eligible defenseman. Between the pipes, Maksim Motorygin (G, Dinamo Moskva) is considered to have edge over his peers, although the MHL is one of the lowest-scoring junior leagues in the world. All were profiled along with several others in our in-depth look into the top-10 2021 draft prospects from the MHL.

As far as teams to watch (for 1st-time eligible players), it is clear that SKA-1946 (SKA) is the team to watch. An off-season trade brought the aforementioned Lazutin and Chibrikov from Dinamo Moskva, and the signing of defenseman Mikhail Berezovskiy adds another strong prospect to man the blueline with Kirsanov. Center Ilya Ivantsov is yet another notable prospect, who will likely play the full season with SKA-1946 after spending the bulk of last season with SKA-Varyagi.

Dinamo Moskva (Dynamo Moscow) is another club that can boast of several prospects for both the 2020 and 2021 NHL Entry Draft. In addition to Motorygin, forwards Aleksandr Kisakov, Matvei Sumin, and Matvei Nadvorny, as well as defensemen Nikita Novikov and Gleb Ivanov are sure to garner interest from scouts.

Other Western Conference teams can also boast of multiple interesting prospects; Loko Yaroslavl (Lokomotiv) is headlined by Lukashevich and center Yeremei Shumilin, and Spartak by defensemen Daniil Sobolev and Vladislav Churkin. Indeed, the Western Conference looks loaded with prospects —  just about any game is likely to feature at least one notable draft-eligible player to keep an eye on moving forward.

The Eastern Conference is another story, as it clearly is the weaker of the two. They still have several high-caliber prospect farms such as Tolpar Ufa (Salavat Ufa), which should receive regular minutes from forwards Nikita Skoropad, Pavel Dergunov, and Filipp Permyakov. The East as a whole appears thinner on high-end types, at least in the early going. Nonetheless, you have to plan for players to eventually come out of nowhere to make their mark on the league and pickup steam in draft circles; even if the West is more prominent and the East have their top neophytes mostly spread out. Ladya (Ladia Togliatti), however, should draw the attention of scouts due to the presence defenseman Dmitri Kostenko and winger Fyodor Svechkov. Additional attentioan should be paid towards Omskie Yastreby (Avangard Omsk), which lost top scorer Yegor Chinakhov but have the likes of Aleksandr Figurin and Akeksandr Prokopenko to add to your early-season watch lists. Lastly, Belye Medvedi (Traktor Chelyabinsk) will ice two prospects of interest in forwards Mikhail Goryunov-Rolgizer and Tigran Yarulin.

So many things to like about this one. First game of the season, two good teams, a good old-fashioned SPB rivalry, and a plethora of NHL Draft prospects. What more could you want? I’ve already mentioned the plethora of prospects on the SKA-1946 roster; Dinamo SPB doesn’t have as much quantity, but they do have Nikita Buruyanov, a winger who could be a dark horse mid round candidate.

2) Sep. 9: MIkhailov Academy vs HK Riga
This probably won’t be the most interesting matchup in terms of 2021 prospects, as HK Riga traditionally rosters an older team and Mikhailov Academy at this point is an unknown. But it is a game of interest nonetheless, as the league’s newest entry gets a chance to extablish itself a little early-season credibility.

3) September 16th, 2020: Stalnye Lisy vs Belye Medvedi
A matchup that will feature two Eastern Conference playoff teams from a season ago, Belye Medvedi’s aforementioned Goryunov-Rolgizer and Yarulin square off against Stalnye Lisy winger Edgar Varagyan and defenseman Bogdan Krokhalev. As an added treat, keep an eye on winger Danila Yurov, a premier prospect for the 2022 NHL draft.

4) Sep. 25: Krasnaya Armiya vs Loko Yaroslavl
While Lukashevich is the main draw for Loko and is expected to be worth the time for scouts and draft enthusiasts, Krasnaya Armiya has a couple high-level prospects of their own in Poltapov and center Dmitri Zugan.

5) Sep. 30: Tolpar vs Omskie Yastreby
The top two teams in the Eastern Conference last season, this game should set the tone for the battles to come between these clubs this year. The previously-mentioned trio from Ufa — Skoropad, Dergunov, and Permyakov — are primed to get a larger role this season, as it is expected that some of Ufa’s stars from last season will spend significant time in a higher league such as the VHL or KHL.

The last comment and 1 other comment(s) need to be approved.
0 replies