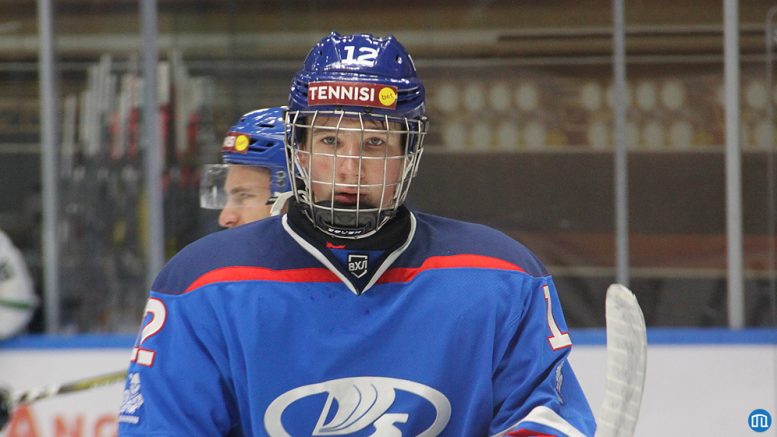 A gifted two-way center who established his reputation as a top-line player several years ago, Svechkov pieced together an impressive draft year in which he carried a thin Ladya squad in Russia’s junior-age MHL before he spent the remainder of the season playing against men for an equally-inept team in the adult-age VHL. Since historical data shows that barely any of the nearly 100 under-18 prospects who have played in the VHL produced anything noteworthy over more than a 10-game sample, it’s important to credit Svechkov for recording the league’s second-most points (15 in 38 games) by an under-18 prospect in his first year of draft eligibility. Svechkov’s season with Ladya in the junior circuit from an individual standpoint was just as impressive, especially since neither of his squads made the playoffs. Although he appeared in only 15 games, Svechkov led the club in points-per-game (1.00), time on ice (19:19), and faceoff percentage (53.7), and ranked second in shots per game (3.5). And it wasn’t just the rate at which Svechkov was scoring, but how and when he was accumulating his impressive numbers. All 15 of his points (4 goals, 11 assists) were primary and 12 came during 5-on-5.

Svechkov also has represented his country with distinction at several international tournaments, specifically the 2019 World under-17 Hockey Challenge (second in goals; third in overall scoring) and the 2021 under-18 IIHF World Championship (fifth in overall scoring), where he won gold and silver, respectively. Svechkov recently was traded to the powerful SKA program, where next season he should either center the top line on the SKA-1946 junior club or get a regular shift with SKA-Neva in the VHL.

Svechkov is an expert stickhandler who can manuever through or around multiple obstacles. As dangerous as he can in the offensive zone, Svechkov is just as much of a threat in the neutral zone when faced with seemingly limited options. A lot of this has to do with his vision and anticipation, but those mean little if one can’t protect the puck for the extra second required when both time and space are nearly eliminated. Svechkov can do that and then some, especially with his back to the play, and his linemates and defense pairings know he can outfox or outmaneuver an opponent just in time to hit a friendly in stride for a clean zone entry.

His skating is more powerful than it is quick, but Svechkov is strong in both departments. He’s an east-west skater who can change speeds and directions several times in one shift, including quick bursts into the middle of the ice that either trap defenders in the neutral zone or back them well off their own line. Svechkov is very strong on his skates and can take a beating without losing possession or balance, and physically-mature defenders in the VHL seemed to find knocking him off the puck harder than anticipated.

Svechkov is a premier playmaker with sharp vision and soft hands. The timing and accuracy of his passes are already at a pro level, which puts him at or near the top of all centers in this draft class. The confident manner in which Svechkov works the puck around the horn or splits the seam lends more to his high hockey IQ than the actual delivery of the puck, as he’ll use look-offs, delays, slap passes, or saucers via his forehand or backhand to render opposing sticks ineffective.

Svechkov likes the shoot the puck but he seems far more comfortable looking to set up his linemates. He usually slots in the right circle on the power play and will use the one-timer with limited effectiveness and accuracy. Svechkov’s wrister is far deadlier, however, and he is pretty successful at sneaking shots through the legs of a defender during 1-on-1 scenarios.

It is no exaggeration to also call Svechkov an elite defensive forward; at least within the context of his age, scope of responsibility, and actual effectiveness. Not only does he show speed and tenacity when reacting to puck travel, but Svechkov seems to fully understand the concept of supporting his unit by NOT trying to do their jobs. His head is always on a swivel, which helps him maintain elasticity from below the goal line and back to the slot if or when his defenseman release into the corner.

Svechkov also is a critical piece in board-side breakouts, which he and linemate Danila Yurov executed to perfection repeatedly at the under-18 world championship. His stick activity and read-and-react game are phenomenal for such a young center, so any team who drafts him needs to allow Svechkov to be used in roles where he will continue to improve be a difference maker off the puck. He may not be mash-and-bash in the physicality department, but Svechkov is a puck hound who will stick to an opponent like Velcro.

By this point in the assessment one should already have a clear understanding that Svechkov is a gifted hockey player who thinks the game on a different level than most neophytes yet without trying to make paint him as the next Wayne Gretzky or Sidney Crosby. Anticipating, reading and reacting, isolating or trapping opponents with stick work, supporting pucks, and neutralizing zone schemes are all things he does to impact the game. His on-ice leadership style isn’t very demonstrative, but he can be an enthusiastic teammate who competes hard and plays like he wants to win.

Top-line, multi-situational center who can also produce points in the mold of a Sean Couturier or Patrice Bergeron.