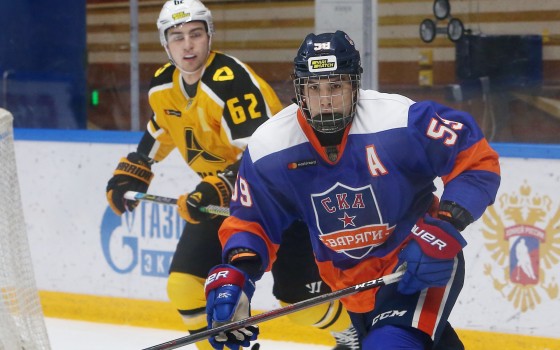 NASHVILLE (The Draft Analyst) —  The first month of the MHL season is in the books! Out west, perennial powerhouses JHC Dynamo and Loko Yaroslavl, plus upstarts Russkie Vityazi Chekhov are all off to impressive starts, while Irbis Kazan, Sputnik Almetievsk, and Avto Yekaterinburg are tied for the top spot in the Eastern Conference. Unlike your standard seasons, however, the amount of games played varies from team to team — some have already played at least 16 games while Stalnye Lisy has registered only seven. Although it isn’t uncommon to see variation, the usual disparity has been exacerbated this year by numerous game postponements. 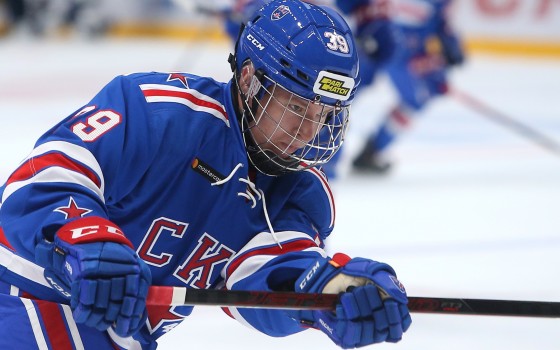 In terms of prospects, the biggest buzz in the MHL this year has been centered around electrifying winger Matvei Michkov (pictured), a 15-year-old wunderkind for the 2023 NHL draft who has seen time for both SKA-1946 and SKA-Varyagi. Although it’s easy to get caught up in the flashy moves that Michkov regularly exhibits, his skating, shooting ability from a static position, and offensive awareness — specifically his anticipation off the puck —  are skills that indicate this young player’s future is beyond promising. Not to mention, the winger leads the league with 14 goals and is second in scoring with 19 points through Oct. 14.

Another interesting development has been the KHL debut of many 2020, 2021, and 2022 NHL draft prospects. The SKA system in particular has been compelled to call-up some of their more talented youngsters, with center Marat Khusnutdinov (MIN 2nd/2020), overage center Maksim Krovyakov (2021), winger Nikita Chibrikov (2021), center Ilya Ivantsov (2021), and defensemen Kirill Kirsanov (2021) and Arseni Koromyslov (2022) all seeing KHL ice.

The season is still quite young, but there is enough information out there to begin evaluating if
this year’s prospects are on the upswing, treading water, or at risk of sliding down rankings and draft boards. It should be noted that a player’s inclusion on this list (whether it is for positive or negative reasons) does not affect my personal board too much- there is still a lot of season left to play, and any dramatic swings would be premature.

Nikita Chibrikov, W, SKA-1946
Chibrikov has had an outstanding start to the 2020-21 season. Widely regarded as one of the better skating and offensively skilled 2021 draft prospects out of the MHL, Chibrikov came into the season seemingly on a mission to prove that he could play a mature game. He has shown impressive board and corner work, and has even been throwing the body around more frequently. If he continues to demonstrate the ability to couple this new playing style with his prodigious skill, Chibrikov will certainly be one of the more highly sought-after MHL players.

Grigori Kuzmin, W, SKA-Varyagi
Kuzmin is another player whose game looks to have grown over the summer. Last year, Kuzmin flashed offensive skill, but appeared to be more comfortable playing on the perimeter of the rink. This year, while no one will confuse Kuzmin of being a physical force, he looks more comfortable paying the price to get to the dangerous parts of the ice. His size (5-foot-8) is the only drawback to an otherwise impressive skill package.

One of the Nazarov twins playing for Loko Yaroslavl, Ilya Nazarov plays the game with a passion that jumps off the screen. He is constantly using his large frame to create havoc in front of the net, or to force a turnover in the offensive zone. Additionally, he has shown that he is not bereft of talent, and while he may not be the line-driving power forward that scouts salivate over, there is the potential for Nazarov to grow into a top-six scoring option if his skating can improve a bit.

#MHL: Well, it’s that time of year where @MHLProspects introduces some of the better Russian neophytes for the #2021NHLDraft. Here’s Loko’s Ilya Nazarov (2021/2003). pic.twitter.com/cbasNtflaa

It may be a little unfair to add Lazutin to this list, seeing as he has only been able to suit up for two games so far, but Lazutin has failed to impress so far. Playing on a line with Michkov, it was the 15-year-old who looked like the driver on the line, with Lazutin looking somewhat lost and uninspired. Additionally, his stride has looked off this year; I don’t know if there is an injury or illness at play, but he did not look like the Lazutin of last season.

Berezovskiy has had a rough time adjusting to the MHL so far. He managed to suit up for only two games with SKA-1946, averaging only 4:16 of ice time. Indeed, Berezovskiy looked like a player still catching up to the speed of the MHL, and has been the perpetrator of several unfortunate errors. However, he has since been suiting up for SKA-Varyagi, and is accordingly receiving more ice time (averaging over 19 minutes per game over four matches) in more situations, which will only serve to grow his game. The MHL is a tough league for young players, and there is no shame in a rookie needing more time to get his hands, timing, and speed up to par. It’s possible that it won’t take much longer before we see the Berezovskiy we were expecting prior to the season.

Mekhovov, all things considered, is a phenomenal skater. He has excellent top speed, and can get there quickly. His edges, while not quite as impressive, are still well-above average for a player his age. Unfortunately, he hasn’t shown the ability to use this asset to create opportunities for his team. Showing some more offensive ability or a physical edge would make him a more projectable prospect moving forward. Nonetheless, we are talking about a very young player early into his regular season. There is plenty of time for him to cultivate his game and showcase additional facets that can make him more appealing.

In a game that featured two premier programs in the MHL’s Western Conference, it was Krasnaya Armiya who was able to outlast SPB by a 3-2 score. Center Dmitry Zugan — one of the top first-year eligibles from Russia in the 2021 draft — assisted on a power-play goal from 2001-born winger Danila Khulapov that tied the score 1-1 in the first period. Zugan would later score the eventual game winner midway through the third. Notable 2021 draft hopeful Prokhor Poltapov did not factor in the scoring but registered a team-high five shots for Krasnaya Armiya.

A battle of of two Eastern Conference teams jockeying for position atop the standings, a veteran Belye Medvedi squad received two goals from overage winger Konstantin Lukin (2001) to down Omskie Yastreby, 3-1. Although he didn’t factor in the scoring, Belye Medvedi center Mikhail Goryunov-Rolgizer (2021) played nearly 14 minutes and had four shots, which was good for second-most on the team. For Omskie, defenseman Aleksandr Figurin (2021) played nearly 18 minutes, and winger Gleb Trikozov (2022 Draft) fired four shots in 15:16.

Unlike the other games on this list, this game could deliver a lopsided result; SKA-1946 is one of the better teams in the MHL, while Taifun is closer to bottom feeding. However, in addition to the already mentioned plethora of talent that SKA-1946 possesses, this game is a chance for scouts and analysts the opportunity to watch Taifun winger Igor Tyutyunnikov compete against top level talent. Tyutyunnikov was relatively unknown in North American circles but has attracted our attention with his combination of grit and offensive awareness.

Although Kazan’s best 2021 prospect, center Dmitri Katelevskiy, likely misses this matchup from VHL promotion, Kazan still has giant center Danil Griyoryev (2021), as well as Ivan Mekhovov. Additionally, overager Emil Galiaskarov (2000) is proving to be too good for the MHL, and may get a look for the 2021 draft if his play thus far is any indication. As for Tolpar, the perennial contender ices a trio of 2021-eligible forwards in center Pavel Dergunov, wingers Nikita Skoropad and Filipp Permyakov, and defenseman Aleksandr Komarov. Additionally, there’s diminutive sniper Aleksandr Pashin, who on Oct. 7 was drafted by the Carolina Hurricanes in the seventh round.