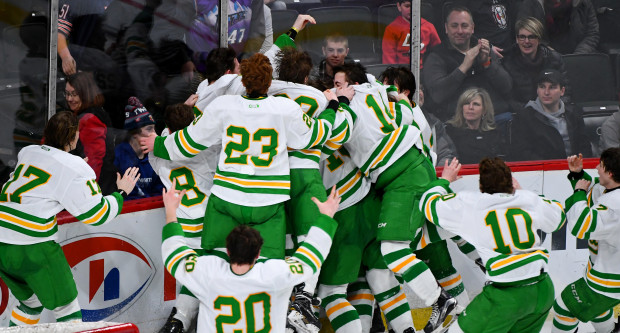 NASHVILLE (The Draft Analyst) — One of the most prestigious high school competitions in the nation kicks off on Wednesday when the State of Hockey lives up to its billing as the epicenter of all sports played on a sheet of ice. Yes, it’s time once again for Minnesota’s annual Boys’ Hockey State Tournament — a 16-team, single-elimination event that produces two state champions and all kinds of memories for players and fans alike.

The tournament only last four days on paper, with championship matches on Saturday for both Class A and Class AA serving as the culminating events. But the impact of “The Tourney” on the local communities involved cannot be measured by dates on a calendar or how many programs can be squeezed into an on-ice Battle Royale. Time and again, this wonderful competition never fails to disappoint in the intrigue and intensity departments regardless of who’s participating.

What can we expect in this year’s show? For starters, you can count on several dozen of the nation’s premier college hockey recruits and their supporting casts to compete feverishly for school pride and hometown bragging rights. But there is also an added twist that has become synonymous with not only Minnesota, but the sport of hockey as a whole. As great as the on-ice product can be, the Minnesota state tournament wouldn’t be the same without the added bonus of “Minneflowta” and all of the wackiness it brings in the form of early-1990’s hairstyles revealed during pregame introductions.

We understand that some of you may be first timers, and because of that, we’ve prepared this quick overview of the 2020 edition.

What is the Minnesota Boys’ Hockey State Tournament?

The Minnesota State High School League (MSHSL) is made up of nearly 200 schools from over 20 conferences throughout the state but only 16 teams participate in the state tournament. These conferences are divided into two classes – Class A and Class AA – and inter-class play is common on a varsity hockey program’s schedule. The regular season for both classes runs from late November to mid-February, whereupon the schools are split into their respective classes for a three-round, single-game elimination playoff called “sectionals”, with eight sections per class. The winning schools of each section – eight apiece for Classes A and AA – are then re-seeded for the right to play for the state championship, or “state”, which takes place in St. Paul at the Xcel Energy Center the first week of March. The state tournament follows the same three-round, single-game elimination as the sectionals, and all four quarterfinal matchups for both Class A and Class AA are played in one day. The winner from each class will be the state champion.

Where is the 2020 Minnesota Boys’ Hockey State Tournament?

This year’s tournament will take place in St. Paul, Minn., at the Xcel Energy Center, which is the home of the NHL’s Minnesota Wild and the NBA’s Minnesota Timberwolves. The arena has hosted the event since March of 2000.

When will the 2020 Minnesota Boys’ Hockey State Tournament take place?

The tournament runs from Wednesday, March 4 to Saturday March 7, with the championship games for both Class A and Class AA on the final day.

The first of Wednesday’s four Class A quarterfinals begins at 11 a.m., followed by an off day on Thursday. Class AA quarterfinals start Thursday also beginning at 11 a.m. Friday will feature the semifinals for both classes, with Class A slotted for the two early games and Class AA closing it out at night. The Class A and Class AA championships will be held on Saturday at 12 p.m. and 7 p.m., respectively, with each title game preceded by a third-place match.

What channel is the 2020 Minnesota Boys’ Hockey State Tournament being aired on?

Which schools are playing in the 2020 Minnesota Boys’ Hockey State Tournament?

A Mr. Hockey finalist for top player in the state, Slukynsky is Warroad’s No. 1 center and go-to forward when the going gets tough. He’s a dual threat who can pass the puck as well as he can finish, but he also thinks the game at a high level and logs a ton of minutes.

Biondi is a prolific scorer who is one of the top forwards in the nation. He’s played for Team USA at the under-17 level and also took part in the under-18 Ivan Hlinka tournament after he was invited to play for the vaunted U.S. National Team Development Program. He has an excellent shot but has the flair and creativity to make his linemates better.

A fast-skating goal scorer who is used in all situations, Steeves has been the driving force behind the potent attack of Eden Prairie, which lost in last year’s title game to Edina and is looking for its first state title since 2011. Steeves was the Eagels’ lone finalist for Mr. Hockey.

A mature and poised two-way defenseman with excellent mobility and a knack for trapping overzealous forecheckers, Kaiser also played for the U.S. Select squad at the Hlinka and is a Mr. Hockey nominee. He is the key figure for arguably the tournament’s best defense corps.

A soft-mitted playmaker with an excellent shot, Smith also turned down an NTDP spot to help lead Cathedral to last year’s Class A title. He was hurt for a good chunk of his senior year but he was next to unstoppable in the sectionals.

A horse along the boards and an impressive all-around forward, Perbix along with teammates Smith and Nate Warner are in the running for the best line in the state. He has excellent vision and puts a soft touch on his passes when necessary.