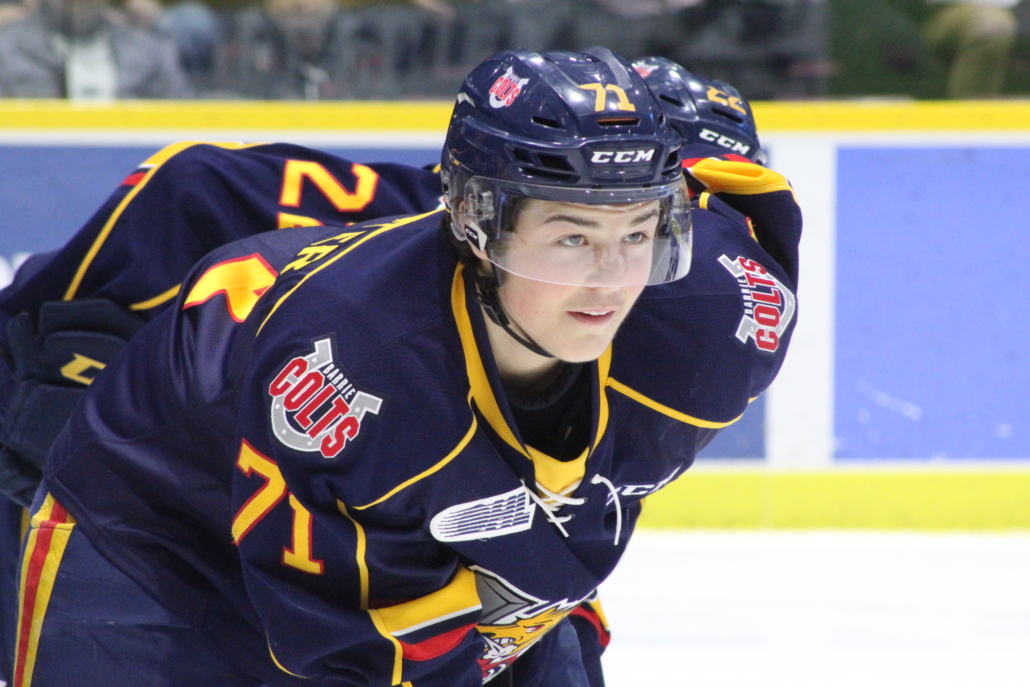 Every draft year has a handful of hopefuls who jump from relative obscurity to near the top of most rankings. Foerster is one of those prospects, but the attention he’s receiving is most certainly deserved. Drafted by Barrie in the third round of the 2019 OHL Priority Selection, Foerster graduated from a depth player to top-line winger rather quickly after the Colts lost their top four scorers from the season prior. His impressive showings grew in frequency as the season progressed and before anyone knew it, Foerster was averaging close to a goal a game for a rebuilding and undermanned squad and was their clear-cut MVP. Word spread quickly, and Foerster was quickly elevated from a C-level prospect on Central Scouting’s October Watch List to a “B” in the November update.

Barrie would give him some help in January trades for center Evan Vierling and winger Ethan Cardwell, and the trio developed chemistry rather quickly. Foerster’s production, however, was actually better in the 35 games before the moves (1.34 points per game) than after (1.22 in 27). The not only showed his ability to carry a team (which he most certainly did) but increased his draft stock significantly. It also didn’t hurt that he was named the Team White Player of the Game at the 2020 CHL Top Prospects Game, where he scored twice and added an assist.

Foerster is essentially a one-way forward who thinks offense all the time. Although he killed penalties and was on the ice for late and close situations, Foerster’s defensive-zone play is average. He works hard and competes in puck battles in all three zones, but his bread and butter is creating scoring chances for either himself of his linemates. A strong skater with average speed but improved close-quarter quickness and elusiveness, Foerster shouldn’t be considered a breakaway threat but he’s more than efficient with his movements and his keen anticipation usually gives him that extra step or two needed to eventually pull away from the pack. If he’s chased down, Foerster reveals excellent balance and expertly protects the puck before stopping on a dime to reverse or curl into open space.

Foerster doesn’t need much of an opening in the offensive zone to bring his elite shot to bear. He can wire it off his back foot, off balance, or while being hounded from behind. His release is explosive and his accuracy — although not on a level of a Jacob Perrault or Jack Quinn — is among the best of first-year draft eligibles in the OHL. His low-danger attempts can give goalies fits as he labels bad-angle shots that result in rebounds in the low slot. His playmaking is equally critical to Barrie’s attack, as Foerster has soft hands and excellent vision, especially in traffic or from the wall. He can make plays on his backhand and will even try a fancy dangle or no-look feed if the situation presents itself. Foerster’s dual-threat capability makes him a lethal option on the power play, especially if he had the presence of a pure quarterback at the point.