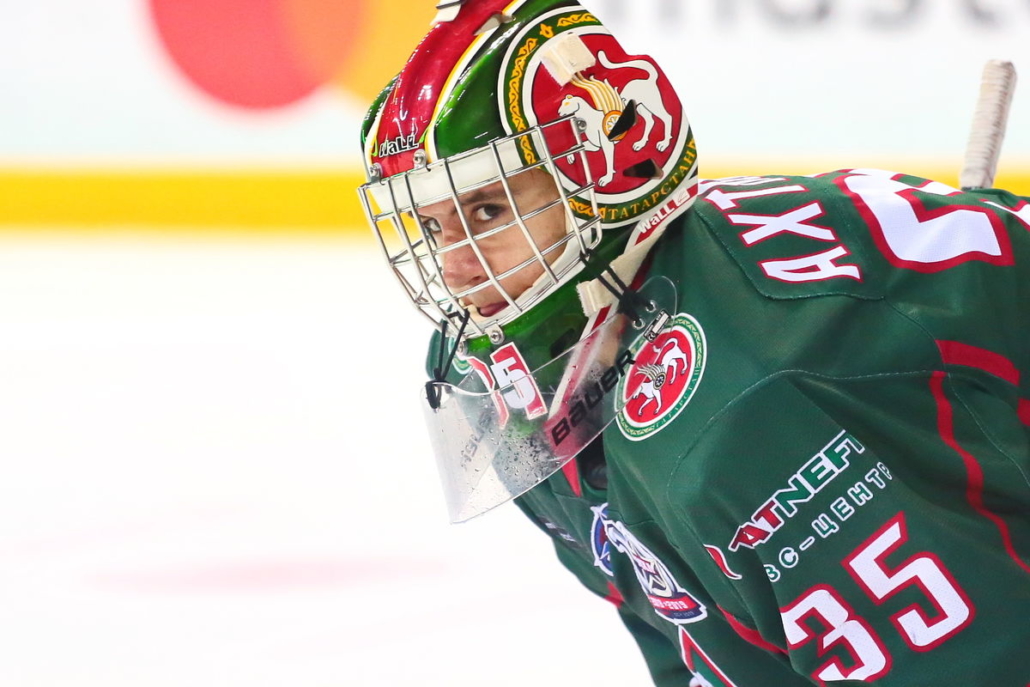 Akhtyamov had a solid season from a traditional statistical standpoint while playing for one of the best defensive teams in Russia’s under-21 MHL. Although a quick glance reveals an impressive save percentage (.931) and seven shutouts, the truth is that Akhtyamov had one of the lightest workloads of any goalie in the league. Of the over 40 MHL goalies who appeared in 25 or more games, Akhtyamov saw only 25.98 shots per 60 minutes, which ranked him 32nd.

Additionally, Akhtyamov faced 30 shots or more in only 12 of his 45 appearances, and in those starts his save percentage (.915) was significantly lower than when facing 29 shots or less (.937). Ultimately, Akhtyamov lost his starting job in the playoffs to backup Vladimir Mosin, a decision that wasn’t too surprising since Akhtyamov was only 5-6-0 with a .912 save percentage in games against the MHL’s top teams. In seven of those 12 games, he faced less than 30 shots.

Akhtyamov uses a hybrid style that leans more towards the butterfly than the stand-up. He is not as active or fluid in his movements as Yaroslav Askarov, but he is equally as aggressive and wields an incredibly active stick. Akhtyamov challenges well about the blue paint — at times a good two to three feet when facing a shooter — and he is willing to gamble with his stick quite frequently. He gets really low in his crouch with proper glove and stick positioning, however his lateral movements alternate between choppy and graceful. Overall, Akhtyamov is a gambler who uses multiple techniques which provided him and his team with varying levels of success.

Akhtyamov uses both the RVH and VH, with an obvious liking to the RVH. Unlike Askarov, Akhtyamov uses the toe-lock and paddle-down techniques when defending against wraparounds or danger originating from the corners. Akhtyamov often presents a tight and textbook seal but reveals openings on the glove-side six hole and short-side corner once danger is imminent. You get a mixed bag with Akhtyamov when he pushes towards to the post, so it’s difficult to categorize him since he offers different stances and post-leans compared to more seasoned or technically superior goalies. He can be beaten from behind the net or shots from the goal-line, and Akhtyamov’s willingness to be hyperactive with his stick and challenge puck carriers to his six o’clock leaves him vulnerable to low-danger attempts. It seems like Akhtyamov will use a variety of skate-to-post methods when in either the RVH or VH.

Akhtyamov keeps his glove low and his palm outward towards the shooter but he gets beaten on both the glove and blocker side with regularity. Although his static positioning seems fine, Akhtyamov’s penchant for losing the net is derived from his movements and it presents the shooter with more room on the long side rather than the short side. Akhtyamov has made several highlight-reel glove and blocker saves, but either have more to do with quickness and reflexes rather than playing his angles properly. Akhtyamov puts a decent amount of rebounds off his blocker into the slot area from medium-danger shots, so that could be another area where a tweak or two can limit the amount of put-back chances he faces from his own doing.

Playing a gambling style helps makes Akhtyamov the last goalie you would consider to be nonchalant, as he certainly earns his paycheck when fighting through screens. Still his T-Push when reacting to seam passes is more unorthodox than it is textbook — Akhtyamov will look before he pivots, and then pivots before he pushes. Ideally, all three would be executed in one emotion to present the shooter with less net to shoot at, but Akhtyamov has such a quick glove and blocker that he can make up for it. The better the shooters get, however, the more he’ll need to correct this.

Akhtyamov relies heavily on his speed and a strong push to react to the puck’s rapid directional changes. The amount of dancing he does inside the crease on normal reverses in puck travel intensifies as play moves closer to the goalmouth. Akhtyamov is quick to reset, however, and the ability of his defensemen and defensively-responsible forwards to collect loose pucks helps make up for his over-aggressive pushes and moments of losing the net. Like most teenage goalies, Akhtyamov’s movements in scramble mode are less technical and calculated and more reactionary and haphazard. As mentioned earlier, he needs to improve the use of his blocker on medium-danger attempts. But his defense of the lower half and ability to direct rebounds away from the low slot with is pads are strong.

Akhtyamov possesses excellent quickness but his technical movements are not textbook. Unlike his aggressive nature when play is behind him, Akhtyamov is very calm during break-ins while using a slow drift after his required C-cuts. There also have ben instances where Akhtyamov challenged two to three feet above the crease and stayed motionless without ever retreating backwards. While this method may work at the under-21 level, Akhtyamov may have less luck against veteran shooters who can deke him into next week with a simple blade adjustment or shoulder fake.

Another area which revealed inconsistencies is when Akhtyamov drops into his butterfly — sometimes he gets both pads down simultaneously, while other instances reveal favoritism towards the right pad dropping first. This exposes the five hole moreso than the preferred method.

Akhtyamov is an excellent puck handler with very strong wrists. He likes to keep plays alive and rarely covers up, even with multiple opponents barreling towards his crease. Akhtyamov is very uselful during the power play by connecting on long stretch passes and his aggressiveness on the penalty kill leads to intercepted dump-ins that disrupt opposing chip-and-chase attempts. He will even hold the puck or delay to allow a forechecker to buzz by before connecting with a defenseman for the breakout. Akhtyamov is more than willing to swing his stick wildly or gamble with emphatic poke checks once pucks begin to enter his reach radius.

Akhtyamov is very energetic and active, but playing for a top defensive team who usually keep the ice tilted the other way helps keep his workload relatively light. There’s only so much work he can accomplish when the puck is usually 150 feet from his crease, thus making it difficult to gauge how well he would hold up in a multi-overtime playoff game or being leaned on for consecutive starts against attacks with high-volume shooters. Additionally, his defensemen do an excellent job of keeping his crease free of second- or third-chance attempts. The fact that he uses multiple methods to cover his lower half could mean he tires out when using the RVH consistently.