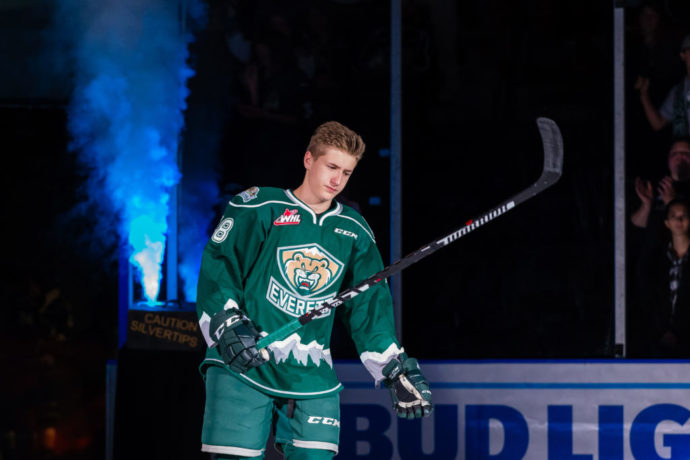 A well-rounded, two-way defenseman who combines skill with physicality, Fairbrother was Everett’s power-play quarterback and also was used in most critical situations. Fairbrother may play for a defense-oriented system in Everett, but he still was able to showcase his strong skating and shooting abilities. Fairbrother is very agile and quick, not only from the start position heading forward but also moving laterally and backwards. His breakouts come in a variety of forms, and if he isn’t trapping forecheckers with a crisp home run or bank pass, Fairbrother is weaving in and out of traffic before making a controlled and calculated zone entry. Fairbroither is reliable controlling the puck and is sought after by teammates who sense trouble. He can handle an aggressive or heavy forecheck and is willing to take a hit to move the puck. Fairbrother owns an excellent shot for both its velocity and accuracy. He can play the role of playmaker in the 1-3-1 power play and shows poise under pressure at the point, and it seems like opposing penalty killers were keeping him tight to the vest after realizing how deadly a shot he can unload. Fairbrother’s slapper is one of the best among draft-eligible defensemen. He keeps is low and on net, but it’s delivered with little backswing.

Fairbrother can be a punishing hitter and uses his strength to clear the low slot. On occasion, he explodes into puck carriers during their zone entries before plastering them into the boards. He makes it a point to make life difficult in the corners, although he can get fixated on one player and remain away from his slot duties longer than he should. He also needs to clean up his undisciplined play, which has led to dirty hits, unnecessary fights and costly penalties.