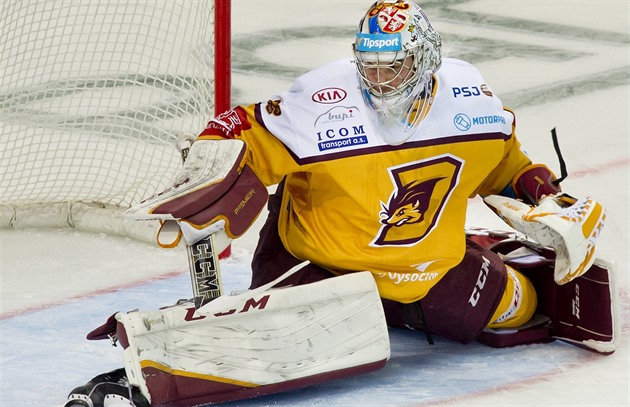 Czech netminder Jakub Skarek has done well in his second season in the Czech Republic’s Extraliga and should be the first goalie taken in the 2018 NHL Draft.

This article originally appeared as my monthly guest column for Dobber Prospects.

1. Jakub Skarek (Jihlava, Czech Extraliga | 6’3, 196): Nightmarish world juniors notwithstanding, Skarek remains the draft’s top goalie prospect. Blessed with size, cat-like quickness and a superior radar for puck movement, Skarek has held him own as a teenager in the Czech Republic’s premiere league. He’s a classic butterfly goalie who handles the puck well and quickly challenges shooters above the crease. One thing that has impressed me is his glove-hand positioning in either the V/H (Vertical/ Horizontal) or RVH (Reverse Vertical/Horizontal) — Skarek keeps the glove directly above his pad to cover the upper half of the short side.

2. Olivier Rodrigue (Drummondville, QMJHL | 6’1, 159): Don’t let Rodrigue’s size scare you away — this kid’s reflexes, rebound control and post-to-post quickness are exceptional. He’s an aggressive netminder who will dart out of the crease to defend shots from anywhere within his own end, and he’s proven to safely steer high-danger shots either into the corners or far from the low slot. Rodrigue’s stick is very active and times his poke checks very well, plus his ability to lock in on pucks throughout an entire cycle helps him interdict cross-crease passes from either corner. His glove hand and its positioning are a work in progress, which when coupled with a low silhouette makes him susceptible to get beaten upstairs, especially on the short side.

#QMJHL: Drummondville is putting a hurt on Rouyn-Noranda. Voltigeurs lead 5-0 midway through the 2nd and G Olivier Rodrigue (Ranked No. 90) has been excellent with several key stops. Leaves too much room on his glove side for my taste but he’s otherwise been a work of art pic.twitter.com/ysGSbZ479G

3. Kevin Mandolese (Cape Breton, QMJHL | 6’4, 180): It’s a good thing that teenage goalies don’t fall under the old Bill Parcells football edict, “you are what your record says you are.” Mandolese is a promising netminder with the misfortune playing behind a pathetic defense, who subject him to third and fourth chances with regularity. His athleticism and aggressiveness play against him at times, especially when the slot is habitually left uncovered and he’s doubling the efforts normally seen from a goalie with a good defense corps protecting him. Still, his initial post-save recovery is excellent and both his blocker and glove hand are very quick.

4. Jacob Ingham (Mississauga, OHL | 6’4, 186): Ingham entered the season as one of the top draft prospects among goalie and has found a way to maintain his standing despite showing critical technical flaws in his net awareness and glove-hand positioning. The good news is that Ingham’s coverage of the lower-half of the net is outstanding, and his flexibility and range of motion allow him to stop second and third chances, specifically if there’s a radical directional change. The width of his butterfly flare looks appealing, and Ingham’s feet appear to be planted and set when squaring himself to the shooter. Unfortunately, his glove hand is not quick enough for it to be position as low as he keeps it, especially when couched low and deep inside the crease.

5. Amir Miftakhov (Irbis Kazan, MHL | 6’0, 158): Miftakhov is another goalie who isn’t tall in the conventional sense but makes up for it with an advanced brain and impressive reflexes. The quickness of his pads, when combined with the positioning of both his blocker and glove hands, fools shooters into thinking they have a chance at beating him in conventional net targets. There a lot of Michael DiPietro to his game, meaning there’s a controlled violence about the way he not only stops pucks, but resets or recovers from initial chances around the net. Facing a barrage of successive shot attempts neither intimidates him or tires him out, but his apparent desire to stay crouched and maintain his side-to-side explosiveness exposes an upper-half that makes him vulnerable to bad-angle snipes. Miftakhov tracks his pucks around bodies rather than over top of them, which presents point men with the opportunity to beat him with harmless shots from the blue line.

#Hlinka: Still 2-1 Russia thanks to this big save by Amir Miftakhov on Rasmus Kupari, who made another dandy move pic.twitter.com/CJ6xiTIfNL

6. Justus Annunen (Karpat U20, Jr. A SM-Liiga | 6’4, 217): Annunen is a rigid butterfly goalie who doesn’t do anything particularly flashy and relies heavily on his wingspan and flare while positioned deep inside the crease to fend off chances from below the hash marks. Being conservative all the time serves him well while playing teenagers, but he will need to increase the frequency of his risk-taking (poke checks, challenging shooters, being a hair less shooter-focused on 2-on-1’s) once he’s facing adult-aged snipers and playmakers. Being married to the posts has its advantages, as he rarely loses awareness and reveals little white space when square to a shooter from any angle. Playing the puck or actively thwarting hard-arounds is something he doesn’t seem comfortable doing, partly because he barely does it and leaves little to the imagination

7. Alexis Gravel (Halifax, QMJHL | 6’3, 219): An up-and-down season shouldn’t detract from how high this big-bodied goalie’s upside truly is. Gravel, who catches with is right and, lost his job as team Canada’s go-to guy to Olivier Rodrigue, and was torched five times in a period and half at the recent Canadian Hockey League Top Prospects Game. In between we’ve see an upright butterfly netminder who uses smart positioning, razor-sharp attentiveness and glove-hand quickness that makes opponents rethink seemingly open looks towards his net. Gravel always looks locked in and fights tooth and nail to maintain a visual on the puck, including when it’s behind the net. He leaks post-to-post coverage when he favors being upright for too long, and his stick positioning during lateral movements expose what’s been a vulnerable five hole. Gravel seems married to the crease and rarely ventures from it during dump-ins or challenging shooting from the points or circles.

8. Lukas Dostal (Kometa Brno, Czech Extraliga | 6’1, 158): Add Dostal to the list of “smaller” goalies whose quickness is a tremendous part of his overall ability to stop pucks. Dostal stays quite low in his butterfly and is willing to leave a good chunk of the net open when challenging shooters on the power play or during odd-man rushes. This tactic seems to lull forwards into thinking the young goalie is over-committing and susceptible to a backdoor or cross-crease pass, which gives off the impression that he causes more forced passes than medium or high-danger shots against. Dostal’s glove and blocker hands are very quick

9. Jett Alexander (North York, OJHL | 6’4, 187): Alexander has quick pads that direct pucks to where they need to go. He’s very good at protecting the lower half, and is nimble enough to recover from rapid dekes from in close by jamming his skate into the long-side post. Alexander is a very active puck handler who on dump-ins can act like a third defenseman, not only by stopping the puck behind the net, but turning quickly and connecting with a teammate up ice. He likes to challenge at times and isn’t married to the goal line, which helps him stop deflections from near the low slot. Alexander has the ability to out-wait players on breakaways

10. Olof Lindbom (Djugarden, SHL | 6’0, 173): Active, borderline fidgety goalie with a lot of positives to his game, beginning with his focus and involvement in all events going on in his own end. Lindbom doesn’t get cheated when it comes to making an impact, and although he seems happily entrenched in his crease, you can never label him as a kid who daydreams until the puck is right before him. He’s not very big, and his penchant for dropping down can present shooters with practically the entire upper-half of the net and a chunk of the lower long side— especially on cross-ice one -time attempts. Still, his head seems to be locked in on the puck and shooter a fraction of a second before the shot is released. Lindbom’s rebound control is excellent, and pucks he puts in front of him are within his reach. But don’t count on Lindbom to break up passes or ever play the puck — a good estimate is he will play less than a quarter of all dump-ins into his own end and relies on his defenders to do most of the leg work.