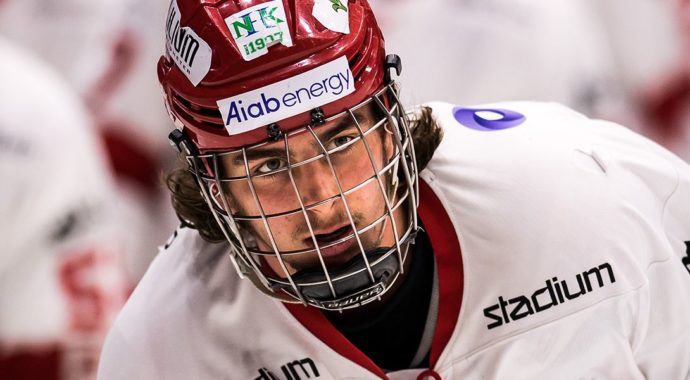 A skilled two-way center with an advanced brain and the size to augment his puck skills, this Swedish pivot had an outstanding season playing against adult competition, which included a solid playoff run that helped Timra win the title and playoff to join the SHL ranks for next season. Olofsson is a strong two-way center that had a tremendous season in Sweden’s Allsvenskan. He was named the league’s top rookie — an award previously won by the likes of William Karlsson and Filip Forsberg. Big, strong, aggressive, tenacious and equally skilled with the puck on either his forehand or backhand, Olofsson can be used in any situation and has the ability to make slick plays near the net. He has an array of moves to beat you 1-on-1 or 1-on-4. He plays in all situations and will use a quick-strike mentality no matter the zone he controls the puck in. Olofsson is very dangerous off the rush since he owns a hard, accurate shot, plus the vision and hands to set-up the linemate who will produce the best chance. He’s a beast on the puck and likes to get his hands dirty on the forecheck or in battles along the wall.

#Hlinka: Czech dmen Malik & Adamek each turned puck over in face of pressure. C Jacob Olofsson with strong finish. Swedes up 2-1 after 20 pic.twitter.com/XP3vQlNZfX