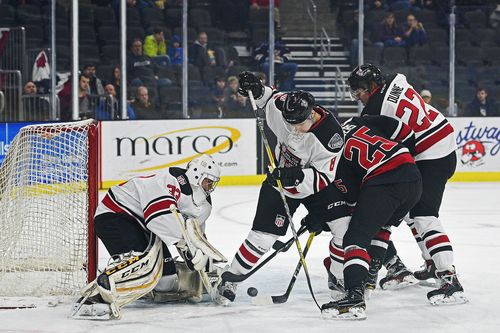 New York (The Draft Analyst) — Something has to give when you pit top-end offensive players against some of the best defense and goalie prospects in amateur hockey. So it should not have come as a surprise when the puck-stopping trio of Dayton Rasmussen, Cayden Primeau and Keith Petruzelli collectively stymied shooters in Team West’s 4-0 blanking of Team East in the USHL Top Prospects Game Tuesday.

Each goalie was perfect during his respective stint, with Muskegon’s Petruzelli stopping all 21 shots he faced to win the Team East MVP award after relieving Green Bay’s Maksim Zhukov midway through the second period. Primeau started for Team West and made 11 saves to pick up the win, and Rasmussen stopped all 14 shots he faced in relief.

Nick Swaney’s wrist shot off a turnover opened the scoring at 4:06 of the first and Paul Washe tallied less than two minutes later with the first of his two goals. Matthew Quercia’s empty netter sealed the victory for Team West, which outshot their opponent 36-25. Zhukov gave up three goals on 14 shots to take the loss.

Team East now leads the all-time series three games to two since the event began in 2012. A total of 54 participants were drafted by NHL teams, including 2015 first-round picks Kyle Connor (Winnipeg) and Brock Boeser (Vancouver).

G Maksim Zhukov (Green Bay Gamblers | 7/22/99, 6’3/187): The stats (three goals on 14 shots) indicate a below-average performance by one of the 2017 Draft’s top netminding prospects. Zhukov may have displayed quickness and flexibility, but two of the three goals allowed revealed the hazards inherent in using a butterfly technique, especially with a teenager still learning the nuances of the position. Make no mistake — Swaney’s goal was a labeled short-side laser beam that fit right under the crossbar. But Zhukov was already on his knees before the shot whistled over his right shoulder, and at 6’3, there’s always the likelihood he lost the net. He wasn’t challenged throughout much of his period and a half of play, and the third goal off a mad scramble in front was a result of too many bodies to his 12 o’clock.

G Keith Petruzelli (Muskegon Lumberjacks – Quinnipiac | 2/9/99, 6’5/180): Petruzelli’s approach to the competition was far more aggressive than Zhukov’s, who did not attack the puck with poke or stick checks when the situation warranted one. Petruzelli’s timing was excellent, and he was jumping on dump-ins well before any sort of pressure was either near him or up the wall. His stick activity and placement were sound, and he ensured post-to-post coverage as he followed shooters moving horizontally. All other key areas — rebound control, puck tracking, etc. — were outstanding, and the MVP honors he earned were most certainly well deserved.

LHD Mario Ferraro (Des Moines Buccaneers – UMass-Amherst | 9/17/98, 5’11/184): Fast puck-moving defensemen with excellent first-step quickness and footwork…keeps a tight gap and takes the right routes to seal off his man…stays glued to his man and will finish checks with authority…not very tall but strong as an ox…Pins his man with little to no chance of escape…aggressive mindset with the puck and explodes up the ice to create a numbers advantage without it…A good bodychecker who likes to drive into people…An offensive-minded defender who looks to transition into an attack no matter where he is or how much traffic is in front of him…owns a booming, accurate shot

RW Paul Washe (Tri-City Storm – Western Michigan | 11/27/98, 6’1/190): Power forward with quickness and a powerful wide stride that makes him difficult to knock off the puck…difficult to dislodge once he’s established a foothold in the crease area…likes to play in the low slot and goal mouth area…has soft hands to settle bouncing pucks or tip hard shots…pounces on pucks with a quick shot and release…very good hand-eye coordination…can whip a hard, accurate shot off the rush or from a static position…a physical player who can wear down opponents.

LHD Jack St. Ivany (Sioux Falls Stampede — Yale | 7/22/99, 6’2/197): Solid two-way defender with size who moves very well and keeps himself engaged at all times..keeps a tight gap and possesses very good backwards mobility…is quick to the puck and makes crisp, accurate breakout passes…owns a very hard slap shot but gets his wrister off in a hurry…aggressive mindset and looks to line up a shot below the circles…Turned the puck over in the middle of the ice twice on one shift…can fumble around with the puck at times but has a general understanding of where pressure is coming from…makes proper reads and times his pinches well.

LHD Michael Karrow (Youngstown Phantoms – Boston College | 12/18/98, 6’2/200): Wide-body two-way blueliner with top-four potential…owns a hard slapper with a big wind up and isn’t afraid to use it…Above-average speed for a big man and very clean with the puck…will take the puck as far as he’s allowed to, even if it’s down to the opposing goal…far more aggressive once the puck is being cycled in the offensive zone…makes solid reads and will fire loose pucks on net without hesitation…strong positional defender who sticks with his man and pins to the boards…can play the point on the PP with effectiveness but more of a shooter than a playmaker…has a pro-build as a teenager but nimble enough to keep pace with quicker finesse players and play the man…plays a game reminiscent of Alex Pietrangelo without that kind of ceiling.

LW Matthew Quercia (Sioux Falls Stampede, Boston Univ. | 2/24/99, 6’2/198): Versatile power forward who uses a combination of size and skill with effectiveness..takes a hit to complete a play…likes to hunt down opponents and finish checks…decent speed but extremely strong on the puck and reliable in the cycle game…difficult to contain once he hits top speed and is able to make plays off the rush…soft hands to handle tough passes or shoot a bouncing puck on net…a Milan Lucic/David Backes type…puck hound who plays aggressive on the forecheck and does not give up on plays…can kill penalties or be used in the slot on the PP…plays with an edge and likes to agitate.

RW Zach Solow (Dubuque Fighting Saints, Northeastern | 11/6/98, 5’9/184): Skilled offensive player who makes his linemates better…excellent passer who keeps his head up at all times at looks for multiple options…serves the puck to his teammates on a silver platter…extremely patient with the puck and will enter the zone under complete control…adept at one-touch and slap passes…always looks for trailers and cutters…strong for his size and will finish checks…very difficult to contain along the wall or in the corner and will win puck battles despite being outnumbered…short stride but is a very good skater and can outpace most defenders…owns a hard, accurate shot and can label it for top corners.

C Shane Bowers (Waterloo Blackhawks, Boston Univ. | 7/30/99, 6’1/183): Dynamic two-way player with a high IQ to compliment his many puck skills…can create or finish plays on the rush…very crafty and creative…makes difficult plays look easy, especially in traffic…strong on the puck and can handle harassment as he’s controlling in tight spaces…looks to slip away into an open area with the hammer cocked…owns a lethal shot and can fire it with accuracy even if the puck is behind, in front of or in his skates…deceptive on zone entries as he can use a speed burst for a cage rush or slow it down and dump it off to a cutter or trailer.

LHD Kaspar Kotkansalo (Sioux Falls Stampede, Boston Univ. | 5/25/99, 6’2/198): Poised defender with size and mobility who isn’t flashy but makes subtle plays to beat a forecheck….will step up in the neutral zone and take the puck beyond the opposing blue line…drops down on occasion but more to keep a play alive than create or execute a scoring chance…limited creativity and owns an average shot..is strong below the faceoff dots and doesn’t wander far from the slot..strength along the wall is good but can get outmuscled by hungrier players regardless of size.

10 Draft Prospects You Should Know About for 2017