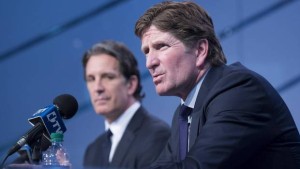 The Globe and Mail

You have to hand it to the Maples Leafs for getting better at one thing and one thing only: they wrote the book on cruel and scrupulous endings. If they don’t melt down late in the regular season, they’re just going to wait until the first round of the playoffs to do it. And when a classic postseason letdown is literally out of their hands, well why not just disappoint everybody at the midway point of the season? Yes, Toronto’s loved ones may have exhausted the manner in which they twist that knife, but when exactly the weapon becomes unsheathed has become more and more unpredictable.

Last season started out well for the Maple Leafs, who were actually in a playoff position before their proverbial bus caught on fire and nosedived into a chasm. As expected, rookie Team President Brendan Shanahan fired everybody (albeit in stages) and essentially called it quits on the 2014-15 season a tad earlier than expected. The good news is that the subsequent makeshift fire sale gave some playing time to promising youngsters like Stuart Percy, Josh Leivo and college star Casey Bailey, and brought back some assets (Cody Franson and Mike Santorelli were traded to Nashville for an additional 2015 first round pick, while the Daniel Winnik move to Pittsburgh fetched a fourth in 2015 and a 2016 second). Adding Mike Babcock to coach the team going forward briefs well, but until they can unload pricy and seemingly unhappy veterans like Phil Kessel, captain Dion Phaneuf and Joffrey Lupul, the proper rebuild Shanahan speaks of simply won’t happen.

How did it come to this point? Well, you can start at the draft table, where Toronto has very little to show for being a lottery team eight of the last nine seasons. After successfully diving into Europe’s talent pool in the 2005 and 2006 drafts (Tukka Rask, Anton Stralman, Jiri Tlusty, Nikolay Kulemin, Viktor Stalberg and Leo Komarov), the Leafs since 2006 have only developed one player (Nazem Kadri, seventh overall in 2009) who reached the reasonable benchmark of a 20-goal/40-point season. While they were able to flip a modest defenseman like Luke Schenn (fifth overall in 2008) for a young scoring winger in James van Riemsdyk, the Leafs’ current rosters claims two above-average NHL’ers they personally developed —  Kadri and stud blueliner Morgan Rielly.

Not everything surrounding the is doom and gloom, as forwards William Nylander (eighth overall in 2014) and Connor Brown (156th overall in 2012) had outstanding rookie seasons in the AHL, and defenseman Rinat Valiev’s solid campaign in Kootenay (46 points in 52 games, tied for sixth among defensemen with 0.89 PPG) provided hope that the Leafs’ beleaguered blue line may receive a much-needed injection of responsible two-way play. And while Toronto could have used the 34th overall pick (traded to Los Angeles in the Jonathan Bernier trade) in what many consider the NHL’s strongest Entry Draft in over a decade, it will surely come out of the draft with several impact players to add to its fledgling farm system.

With a total of seven picks in the upcoming draft, the Leafs and their triumvirate of general managers (Shanahan named both Kyle Dubas and Mark Hunter “co-interim GM’s”) have something to look forward to. While Shanahan went on record saying the Leafs will take the best player available with the fourth overall pick, there remains the possibility that they trade down to stockpile additional assets previous Leafs regimes tossed away.  An offensive player like one of locals Dylan Strome or Mitch Marner may make the offense more lethal, but consistency and depth on defense, and forwards who commit to all three ones are what the Leafs do not possess. In that regard, drafting a potential franchise defenseman like Noah Hanifin, or trading a few spots down to nab Ivan Provorov or Zach Werenski would be far more prudent and logical. Building from the back end outward has not been a strategy used in Toronto for several years. Maybe it’s time to rethink it.