Photo courtesy of The WHL 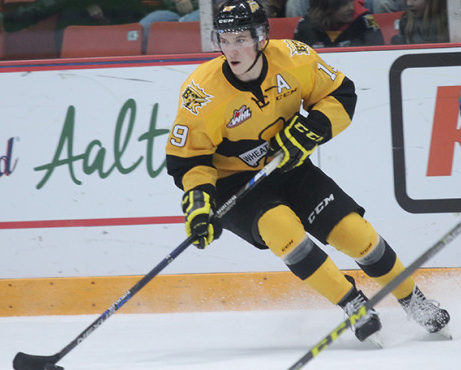 NEW YORK (The Draft Analyst) — Nolan Patrick, widely regarded as the best player available for the 2017 NHL Draft, didn’t hurt his reputation by posting a solid opening week with three points in his first two games. The Brandon Wheat Kings center, who finished last year fifth in WHL scoring with 102 points, ranks at or near the top in most of the significant measurables a draft prospect is rated on — size, playmaking, shooting, leadership and versatility. Patrick has been the 2017 draft’s most talked about amateur for quite some time — he was selected first overall in the WHL’s 2013 Bantam Draft and was Team Canada’s top-line center at the 2015 under-18 Ivan Hlinka tournament despite being the youngest player on the roster. The question isn’t whether he’ll end up as the top pick when the draft convenes in Chicago this June as much as who will be the team lucky enough to select him. Basically, first overall is Patrick’s to lose, even if the season is only a week old.

The relentless search for impact players with the shortest paths to the NHL will seem more arduous to evaluators than in previous drafts. Patience will be the key, as the crop of 2017 draft eligibles pales in comparison to the depth of 2015, or even last year’s top-heavy first round. Patrick, like 2016 top pick Auston Mathews, will be one of his draft class’s elder statesmen, missing last year’s eligibility by only a few days. He will, however, be somewhat challenged by an equally dynamic power forward in Minnesota high schooler Casey Mittelstadt, an explosive scorer with a penchant for delivering when the spotlight shines the brightest. Mittelstadt was outstanding for Team USA at last April’s U18 world championship (a tournament Patrick missed because his Wheat Kings were in the WHL playoffs), and was recently named MVP of the star-studded CCM/USA Hockey All-American Prospects Game.

Additional challengers include Swedish defender Timothy Liljegren, an offensive blueliner with an excellent shot but one who is improving his defensive play as he faces adult competition on a nightly basis. He played well at both the U18’s and the Hlinka, and was entrusted with significant minutes for Rogle in the Swedish Hockey League before getting shelved with mononucleosis. Another top draft-eligible defender, Finland’s Urho Vaakanainen, made his mark playing against adults in the Finnish Liiga but was sidelined with a head injury. Both he and Liljegren should expect to suit up their respective countries when the U20 world junior championship begin in Canada in late December.

The Canadian Hockey League should be well represented on draft day, even if some of the high-end picks are quality European-born imports who flooded Canada and the United States for this coming season. Five of the first eight CHL players we ranked  packed their bags and crossed the Atlantic for the proverbial greener pastures of North America, beginning with dynamic Swiss puck wizard and Halifax Moosehead Nico Hischier. Dmitri Samorukov, a Russian who is one of the draft’s most physical defenseman, will play a pivotal role for Guelph, and Slovak power forward Adam Ruzicka is a three-zone threat who wasted little time leaving an imprint on the Ontario Hockey League. The Sarnia Sting picked up five points in his first two games.

The top Canadian-born prospect after Patrick is Victoriaville Tigres winger Maxime Comtois, a hard-charging difference maker with a pro-level understanding of the game. Comtois, who was Team Canada’s top forward at the Hlinka, holds a slight edge over fellow CHL’er and Windsor Spitfires’ pivot Gabe Vilardi, a big-bodied playmaking center with exceptional puck control who is nursing a knee injury he suffered over the summer.

Below is a detailed sortable table of The Draft Analyst’s September rankings of first-year, draft-eligible prospects for the 2017 NHL Entry Draft, to be held in Chicago from 23-24 June. Players born between 16 September 1998 and 15 September 1999 were considered in the zone for first-year eligibility.