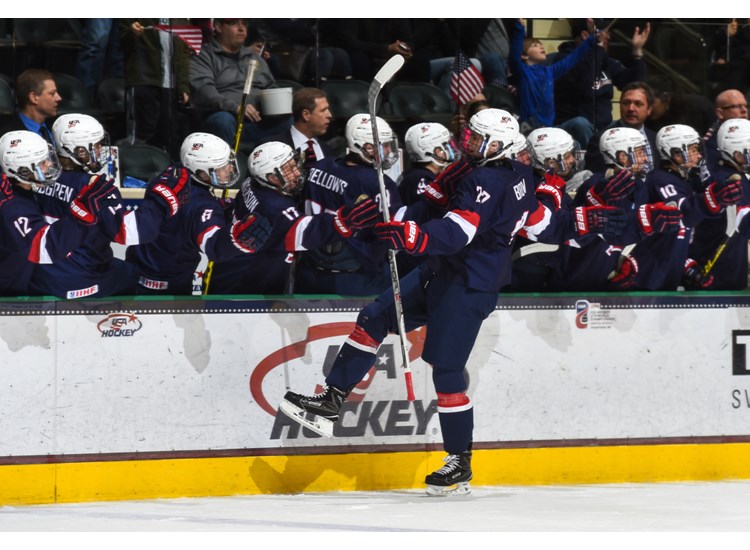 New York (The Draft Analyst) — USA Hockey’s attempt to build its third world junior champion in eight years took an anticipated turn yesterday with the announcement of its preliminary roster for the upcoming under-20 tournament. The group responsible for selecting the roster isn’t looking for a Dream Team — most of the top Americans eligible to participate are in the NHL and won’t be released by their respective teams. But the 27 players invited to the final evaluation camp in Buffalo  — 15 forwards, eight defensemen and three goalies — form yet another deep collection of talent strong enough to contend for gold.

The obvious strength is within the forward ranks, where you will find eight of Team USA’s nine first-round draft picks. Colin White, a powerful two-way center for Boston College selected 15th overall by the Ottawa Senators in 2015, had four goals and an assist in his last two international games against the host Canadians, who traditionally present the Americans with their toughest competition. The health of Arizona Coyotes prospect Clayton Keller remains a question mark, but massive pivot Logan Brown — also a Senators draft pick — is more than talented to center any of the top two lines. Both were first round selections in 2016 and each won a bronze medal for Team USA at last April’s under-18 world championship.

The flanks feature a mix of lethal, goal-scoring bangers and sublime playmaking magicians. Brock Boeser — a top pick of the Vancouver Canucks in 2015 — and Chicago Blackhawks draftee Alex DeBrincat were both disappointing in last year’s competition but each possess world-class shots and will log significant minutes, especially on the power play. Jack Roslovic, Jeremy Bracco, Jordan Greenway and Luke Kunin are alumni from the National Team Development Program that trounced the Canadians en route to the 2015 U18 title, and Kiefer Bellows and Joey Anderson teamed with Keller last season to form one of the most productive lines in NTDP history.

The defense is relatively young by WJC standards, as only two of the eight blueliners invited to camp — 2016 draft picks Charlie McAvoy (Boston) and Chad Krys (Florida) — perviously played in a U20 tournament. Sublime playmakers Adam Fox and Jack Ahcan should take advantage of the larger international ice surface, but it’s the hard-hitting, disciplined styles of McAvoy and fellow Bruins prospect Ryan Lindgren that Team USA will call on during critical late-game situations.

A hot goaltender can be all that separates a team from contender to champion, and London Knights netminder Tyler Parsons (Calgary) has experience handling the pressure cooker of nationally televised championship hockey in Canada. The Michigan native backstopped the Knights to a Memorial Cup last May and should be an easy choice to start. Backing him up will become the responsibility of one of two Hockey East goalies — Joseph Woll (Boston College) and Jake Oettinger (Boston University).

The final evaluation camp will take place in Buffalo beginning on December 16, with the final roster expected to be announced on or around the 24th of the month.