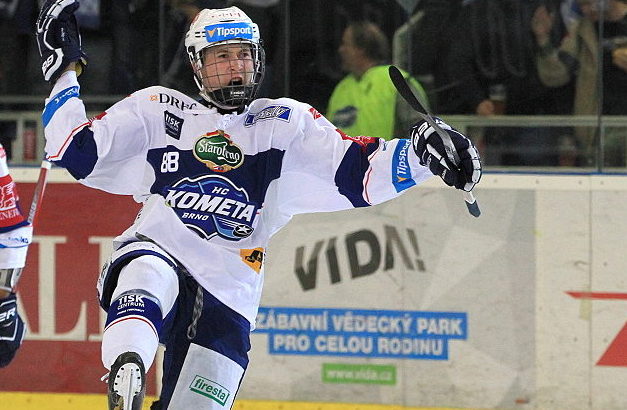 Center Martin Necas of the Czech Republic is one of the top European prospects for the 2017 NHL Entry Draft.

The Battle for No. 1

A pair of players, one of them with the strength of an ox and shoulders broad enough to carry a franchise, the other can attack with stealth and lethality, arrived to this point as two of the best players the 2017 NHL Draft will offer. Nolan Patrick (Ranked No. 1), the heart-and-soul leader of the WHL’s Brandon Wheat Kings, and Swiss phenom Nico Hischier (Ranked No. 3) of the Halifax Mooseheads in the Quebec Major Junior Hockey League, could very easily be the first two players chosen when the draft takes place next June in Chicago. At least that seems to be the popular opinion. But with all due respect to Mssr. Hischier, his impressive resume is still not enough to bump Minnesota high school phenom Casey Mittelstadt (Ranked No. 2) from the second spot he held in our early-season rankings.

The injuries that shelved Patrick — the preseason consensus top pick — can be looked at as a sort of blessing, as he was forced to bypass the gauntlet of pre-draft exhibitions and tournaments that can attrit a high-ranking prospect into a lower echelon. Playing under a round-the-clock microscope is a byproduct of being both good and popular, but it can also give bored talent evaluators reasons to nitpick an area of the game that most would otherwise consider unimportant. In other words, the fully-healed Patrick has done nothing to hurt his draft stock and remains our favorite to go first overall, even after Hischier took advantage of the spotlight with a fantastic performance at the under-20 world junior championship over Christmas break.

From the statistics made available to us, a strong case can be made that either player is worthy of the historic privilege of being the top pick of a draft. Patrick, whose combination of skill and power makes him the prototypical North American player, is producing at a 1.65 points per game clip, while Hischier has a slight edge at 1.69 PPG. Their production since Patrick’s return on January 13th has been close to equal as well, with Patrick notching eight goals and 21 points in 13 games, Hischier eight and 18 in 11. Hischier, however, has collected an impressive 21 primary assists in 45 games (0.56), while Patrick (seven in 17 games) averages only 0.41 primary assists per contest.

The question is whether Hischier’s dominance as a rookie European in North America is enough to overtake Patrick’s seamless post-injury transition. We don’t think it is, and feel a healthy Patrick remains the draft prospect with the highest upside and shortest path to NHL stardom.

Mittelstadt has not been given the widespread attention he deserves, so we’ll add to his case. He was the United States Hockey League’s leading scorer when he chose to return to Eden Prairie High School for his senior year, so we won’t punish him for possessing the burning desire to win the state championhip that narrowly escaped him a year ago. Make no mistake — Mittelstadt is a winner and a clutch player with leadership qualities to support a lethal skill set centered on creativity and timeliness.

So why rank Mittelstadt a head of Hischier rather than the other way around? For starters, he was just as good, if not better, than Hischier when they competed as 16-year-olds at the 2015 U18 Ivan Hlinka Tournament, where he finished tied for second in overall scoring. Additionally, it was Mittelstadt who had the stronger 2016 U18 world championship in Grand Forks, albeit on a better team. Hischier leading CHL rookies in scoring as a European import is not rare (Vitalii Abramov did it last year while playing for Gatineau), but Mittelstadt topping the USHL in points in a pre-draft season is in our minds the bigger accomplishment.

Remember, it goes beyond stats. When the number are equal or close to it, relying on the intangibles and assessing how skills translate at higher levels of play is equally as important. Mittelstadt’s advantages in versatility and size, plus a penchant for big game production are what solidifies him as the second best prospect for the 2017 draft.

NHL success likely for this group of unheralded stars

The affair between the NHL and almost a half dozen of its 2016 draftees has been nothing short of a spring fling; Auston Matthews, Patrik Laine, Matthew Tkachuk, Jesse Puljujarvi and Jakob Chychrun were all first rounders who made their NHL debuts while the ink was drying on their contracts. The crop of 2017 draft-eligibles, however, should not be expected to do the same. And while the idea of a teenager on a manageable entry-level contract bringing hope and enthusiasm to a club that just missed the playoffs is undeniably alluring, we recommend fans and general managers temper their expectations for the 2017-18 season.

Still, there are several high-end prospects representing several positions who have cornerstone upside, specifically those playing in European leagues against older, tougher competition. A bout with mononucleosis notwithstanding, Swedish defenseman Timothy Liljegren (Ranked No. 5) has not had as rough a reason as some want you to think — He is a dynamic puck mover with a blistering shot and excellent offensive instincts in the mold of Ottawa Senators Norris Trophy winner Erik Karlsson. Yes, he looked sluggish upon returning from his ilness and needed a (brief) rehab stint in a junior league to get his strength and timing back. He’s back with Rogle in the Swedish Hockey League, running their power play and showing glimpses of greatness.

Liljegren is not the only European-trained blueliner with top-pairing potential. Three Finns — Miro Heiskanen (Ranked No. 9), Juuso Valimaki (Ranked No. 11) and Urho Vaakanainen (Ranked No. 14) are all fantastic two-way defensemen with mobility who can quarterback a power play, beat pressure with poise and accuracy, and provide excellent slot coverage. Neither has the game-breaking abilities of the aforementioned Liljegren, but both Heiskanen (IFK) and Vaakanainen (JyP) play in Finland’s premier Liiga and owned critical roles at varying points of the season.

Up front, the two best finishers are Sioux City sniper Eeli Tolvanen (Ranked No. 4) and Mississauga’s power forward Owen Tippett (Ranked No. 6). Tolvanen was one of several Finns who struggled to find offense at a collectively disappointing WJC, but he leads the USHL with 176 shots in 35 games. He has a strong upper body and quick release off his back foot reminiscent of a young Brett Hull, and he still pumped 50 shots in 12 games despite scoring only one goal in that span. Like Tolvanen, Tippett loves to shoot and scores in bunches. His 246 shots lead the OHL and no CHL first-year eligible has more goals (39).

The most exciting player of the lottery-bound group is Czech center Martin Necas (Pictured – Ranked No. 8), who is fresh off a dominant performance at last weekend’s U18 Five Nations Tournament. Necas is an outstanding playmaker with two-way capabilities who develops instant chemistry with any linemate. He handles a tremendous amount of responsibility playing on one of Brno’s top lines in the Czech Extraliga and seems like he is close to ready for the rigors of the NHL.

Two Swedish forwards — center Elias Pettersson (Ranked No. 7) and center/winger Lias Andersson (Ranked No. 10) are smart, fast and skilled enough to one day become NHL regulars. Both excel in the 200-foot game and possess ridiculously soft hands good enough to succeed on either the power play or penalty kill. Windsor’s Gabe Vilardi (Ranked No. 12), a converted center with exceptional hand-eye coordination and a blistering shot, shook off early-season injury woes but has a ton of work to do in the skating department. He’s beyond gifted with the puck and can stickhandle with the best of them, but lacking that extra gear is something his opponents will work feverishly to exploit. Had he been a step or two quicker, we’re mentioning his name as a legitimate candidate for first overall.

Time to Get Creative

Expect the unexpected once the lottery is complete

One would think that the lack of trades involving 2017 first round picks has more to do with either the salary cap or the standings than anything else. And while that may be true, add the the impending expansion draft(s) as yet another reason NHL GM’s are choosing to turn down offers for rentals or quick fixes in favor of picks.

The 2017 pool of draftees is not deep, meaning post-draft player development is far more critical than in previous years. It remains to be seen how a GM and his scouts attack this draft, as the best player available in the second or third round in 2017 is likely to have a lower ceiling than a fifth or sicth round pick from a stronger pool. Fans tend to hate it when their team drafts for need because you run the risk of missing out on a game breaking star (See Dylan McIlrath over Vladimir Tarasenko in 2010). This draft, however, has to be strategized with looming expansion drafts in mind — if your organization is full of hit-or-miss scoring forwards but has only one or two quality defense prospects, the drafting expansion team will likely target the quality rather than the quantity.

In other words, you might hate the immediate result, but your team will be better off long-term.

There are, however, a select few from the 2017 crop that have legitimate star potential. Defenseman Cale Makar (Ranked No. 24) is the best North American blueliner in terms of pure puck skills. A dizzying combination of speed and skill, Makar has that “Wow” factor that people pay to see at any level. Yes, he plays in the Alberta Junior Hockey League and yes, he was not heavily recruited by the big NCAA powerhouses (he’s committed to UMass-Amherst). But put this kid in the right system that allows him to be unbridled and autonomous, and you may be looking at the next Phil Housely.

Across a pond, another high-IQ rearguard displays ridiculous puck skills while running his team’s offense. Erik Brannstrom (Ranked No. 16) may lack the height you would want in a top-end puck mover, but every other area is drool worthy. He owns a cannon of a shot, carries the puck with anger and confidence, and can hold his own in one-on-one situations. Like Makar, Brannstrom does everything quick and hard — passes, shots, checks — and his international resume is stellar.

It wasn’t too long ago when a pair of power forwards — Russian Klim Kostin (Ranked No. 13) and Finland’s Kristian Vesalainen (Ranked No. 15) — were all but guaranteed to be Top-5 picks. But Kostin has been knocked out with a shoulder injury, while Vesalainen has been up and down between leagues with a poor WJC performance to boot. They both play a menacing, physical style combined with a dual pass/shot threat. Like most power forwards, however, their consistency is limited to effort and board battles when they struggle to find the back of the net.

Building From The Net Out

One thing this draft offers more than in previous years in a deep collection of goaltenders. Close to a dozen should be expected to go within the top three rounds, with Finnish backstop Ukko-Pekka Luukkonen (Ranked No. 37) and Windsor’s Michael DiPietro (Ranked No. 39) our two best available. The quality does not stop there, however, as a duo of USHL-trained backstops — Cayden Primeau (Ranked No. 42) and Maksim Zhukov (Ranked No. 48) — could challenge for not only first goalie taken, but in the first round as well.

Below is a detailed sortable table of The Draft Analyst’s midseason rankings of the top 500 first-year, draft-eligible prospects for the 2017 NHL Entry Draft, to be held in Chicago from 23-24 June. Players born between 16 September 1998 and 15 September 1999 were considered in the zone for first-year eligibility.