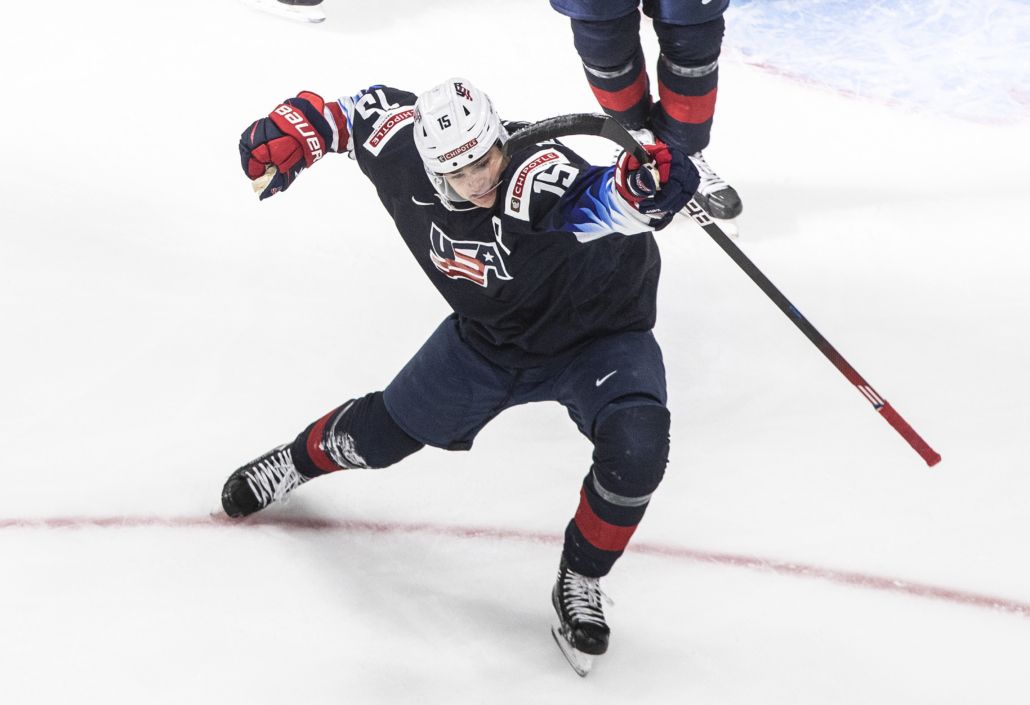 Quinton Byfield erupted for two goals and four assists to help Canada to a 10-0 rout of Switzerland. Byfield, who was taken second overall in the 2020 draft by Los Angeles, set up Phil Tomasino’s opening strike just 1:30 into the game to give Canada a 1-0 lead. Byfield added two more assists in a penalty-filled second period before scoring two goals of his own in the final frame. Calgary Flames prospect Jakob Pelletier scored twice himself and notched an assist, as he and Byfield were two of nine Canadians to record a multi-point game. Canada controlled the game from the onset and outshot the Swiss 52-15 for the game, including 23-4 in the middle period. The victory helped Canada remain undefeated and clinch a berth in the quarterfinals.

#WJC: Byfield gets his second of the night after another nice play from Jack Quinn. Cole Perfetti (WIN 1st/2020) sniped one shortly thereafter so it’s 8-0 Canada over Switzerland in the third period. pic.twitter.com/qPPoPyO2rI

RW Raymond Fust (SUI): It was hard to pick a standout prospect from a team that got its doors blown off, but Fust revealed some intriguing characteristics during what amounted to two full periods of garbage time. For starters, Fust is no stranger to North American hockey — he’s played for Northwood Prep in Upstate New York and signed on to join the BCHL’s Chilliwack Chiefs once the tournament is over. Against Canada, the 6-foot-2 winger was quite efficient while manning left wing on Switzerland’s top line alongside winger Simon Knak and center Lorenzo Canonica. He’s best suited for a net-front role where he can use his size and reach to his advantage, but against Canada Fust showed quick feet along the boards and read the movements and intentions of his linemates. Fust, who has a late-2002 birthday, finished with three shots in 18:27 of ice time but he also took a tripping penalty and had his pocket picked by Dylan Cozens that led to a Connor McMichael goal in garbage time.

The Swiss weren’t expected to make much noise in this year’s tournament so a blowout loss to Canada shouldn’t surprise anyone. The Canadians improved to 3-0-0 and can climnch Group A with a regulation or overtime win over Finland on Dec. 31. For the Swiss, it’s do-or-die time as they need a regulation win over Germany to avoid early elimination from medal contention. If there was one significant takeaway for either club, it was the Canada’s Quinton Byfield finally showcased his skills in an impressive six-point effort. The young center was by no means struggling in either of his first two games, and Byfield’s physical play, coverage and effort off the puck, and faceoff prowess (28-for-40 through first three games) in those matches helps validate the pre-draft assessments that labeled him a versatile two-way center.

A Russian attack that was stymied in a shutout loss to the Czech Republic came to life in a 7-1 rout of Austria. Vasily Podkolzin led the way with two goals and an assist in the first period to help Russia clinch a berth in the quarterfinal and put them in a position to potentially clinch Group A with a win over Sweden on Dec. 30. Russia jumped out to an early 1-0 lead at 4:04 of the first period when Rodion Amirov scored on a penalty shot drawn by teammate Yegor Chinakhov. Chinakhov, a first-round pick of the Columbus Blue Jackets in the 2020 draft, crashed into the boards after a breakaway attempt and had to leave the game. Podkolzin made it 2-0 just over two minutes later by walking out from the right circle and firing a wrist shot past Austrian goalie Jakob Brandner. Russia increased its lead to 3-0 when Podkolzin potted his second goal of the period with 6:16 left. He later assisted on Marat Khusnutdinov’s marker that made it 4-0 with under four minutes remaining in the opening frame. Artemi Knyazev, Egor Afanaseyev, and Arseni Gritsyuk rounded out the scoring for Russia, which outshot Austria 50-18. Senna Peeters scored the lone goal for winless Austria, which has been outscored 22-1 in their three losses.

LHD Kirill Kirsanov (RUS): The surge in minutes and expansion of role continued for this steady two-way defenseman, whose ice time jumped from 17:25 in the opener against the U.S. to 18:29 versus the Czechs, then 19:15 in tonight’s match. In fact, Kirsanov’s 7:46 in the first period was the most of any Russian defenseman. This type of progression included his first time seeing the power play, albeit during garbage time. And although Kirsanov isn’t much of a playmaker, his soft hands and quick thinking helps him handle pressure quite easily, and on several occasions he used his backhand to deliver an accurate feed to the point after being harassed along the wall. He simply avoids fiddling around with the puck and doesn’t overskate it or try anything with a high degree of difficult. Granted, this was Austria as an opponent, but Kirsanov showed the same instincts for activation and step-ups as he did in tighter games against tougher opponents. A very confident and poised defender on a Russian blue line that as a group has been inconsistent with their puck management.

Much like Byfield in Canada’s victory, it was nice to see Vasily Podkolzin get rewarded for his hard work and the lengthy possessions he orchestrates. Most important for the Russian captain is the ability to create time and space for his linemates, and for the first time this tournament it appeared as though his opponent was helpless when trying to slow him down. For Russia to medal, however, Podkolzin must build off his performance against Austria — an opponent which clearly doesn’t belong in Edmonton from a skill or execution point of view. Even in victory, this Russian group of forwards seems far more opportunistic than skilled or electrifying, which will require players like Podkolzin to dominate the possession game while wearing down opponents shift by shift.

A game that was billed to be a potential challenge for the Americans’ desire to win Group A turned out to be a laugher, as Trevor Zegras had a five-point night and Bobby Brink scored two timely goals to lead the United States to a 7-1 romp over the Czech Republic. The game was scoreless after one period with the Czechs holding a 10-8 edge in shots, but it was the Americans who broke the deadlock thanks to a rebound goal from Brink at 5:33. Brink was positioned at the side of the Czech goal and poked home a loose puck following a shot into a crowd from Brett Berard. Zegras made it 2-0 with 6:30 remaining when after entering the offensive zone unmolested he slipped into an opening and one-timed a feed from Henry Thrun past goalie Lukas Parik. Brink potted his second of the period a few minutes later after a lengthy possession in which Matt Beniers delivered  a strike towards the goal that Brink redirected home. The Americans blew the game open with four goals in the third period, including the first of the tournament for Cole Caufield and Arthur Kaliyev. Spencer Knight stopped 22 shots to earn the shutout for the U.S., which improved to 2-1-0 and remain eligible to clinch Group A.

Trevor Zegras just mesmerized the hell out of the Czechs. Puck Gazing 101.

C Matthew Beniers (U.S.): Much like in his previous two games, Beniers proved to be a dependable workhorse who could single-handedly change the momentum of a shift with sound decision making. This may have been his best game thus far, which says something because he was strong in each of his first two. Beniers went 9-for-11 on draws and delivered a strike of a primary assist to Bobby Brink to give the Americans some breathing room heading into the final period. His most impressive shift came in the early stages of the third when he retreated back to his own end to recover the puck before slicing and weaving through all five Czech skaters for a clean zone entry and set-up to Matt Boldy for a shot. This display encompassed several vital areas that are often overlooked and don’t show up in the box score — anticipation of puck travel, defensive play, first-step quickness and acceleration, stickhandling, agility, and vision.

This game was more of a statement by the Americans as it was an indictment of the quality of their opponents. The Czechs played a perfect game in beating the Russians and were able to employ the same suffocating style against the U.S., albeit for only a period and a half. Anyone who has followed this 2001-born group knows that they rarely struggle in generating chances and one of the only ways to defend against their heavy pressure is for the opposing goalie to be the best player on the ice. That didn’t happen for the Czechs on Tuesday, as the Americans turned a tight-checking affair into a blowout. Although it was not a devastating loss for the Czech Republic, which closes out group play against hapless Austria, the opportunity to win the group has slipped away yet again.