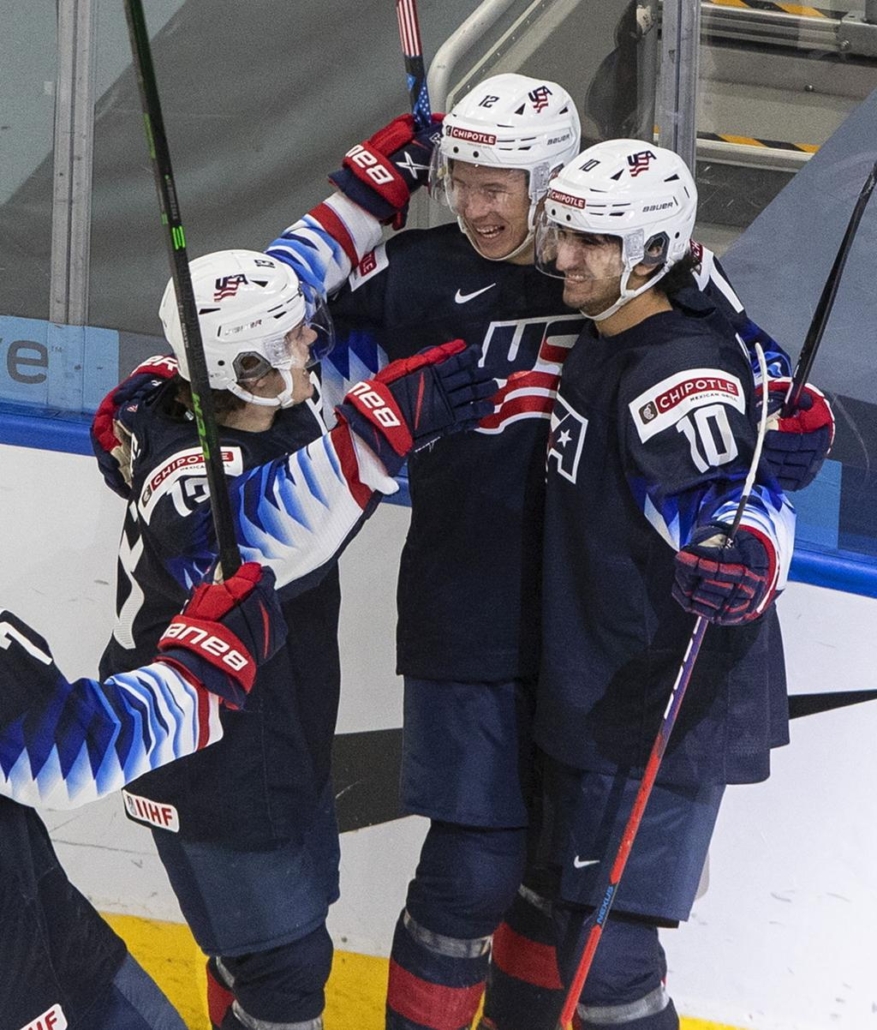 Albin Sundsvik scored the go-ahead goal on the power play midway through the second period as Sweden used seven different goal scorers to thump the Czech Republic 7-1 in their World Juniors’ opener. With the game tied at 1 in the second, Sundsvik put Sweden ahead for good at the 9:08 mark when he buried the puck past Czech goalie Nick Malik from the side of the net. A fortunate bounce from Simon Holmstrom’s one-timer caromed off the boards and onto Sundsvik’s stick before potting it past a lunging Malik.

Sweden would break the game open with two more markers in the middle frame, beginning with a short-handed breakaway goal from Florida Panthers’ draftee Emil Heineman with 8:05 left. A power-play tally from Theodor Niederbach with 3:55 remaining made it 4-1, and Elmer Soderblom, Oscar Bjerselius, and Noel Gunler added strikes in the third for the Swedes, who outshot the Czechs 41-25. Hugo Alnefelt made 24 saves to pick up the win.

The two nations traded goals in the first period before Sweden rattled off the final six tallies. Jan Mysak, a second-round pick of the Montreal Canadiens in last October’s draft, put the Czechs ahead 1-0 with a power-play goal with 9:46 left in the first. Mysak found himself alone at the side of the Swedish net and converted a touch feed from New Jersey Devils prospect Jaromir Pytlik. The Swedes responded 32 seconds later when Arvid Costmar redirected home a nice feed from 2019 first-round pick Victor Soderstrom, an Arizona Coyotes prospect who played a game-high 21:49.

#WJC: C Albin Sundsvik (ANA 6th/2020) gets the opportunistic carom on the PP after a shanked shot from Simon Holmstrom (NYI 1st/2018) gets tipped en route to the net. Nothing Nick Malik could do about that one. Swedes lead the Czech Rep. 2-1 in the 2nd. pic.twitter.com/JkwUVAFQ7g

LHD Stanislav Svozil (CZE): Considered by most to be the top Czech draft prospect for 2021, Svozil had several impressive moments in between the uphill struggle he and his mates found themselves dealing with. He was profiled in our preview as a poised and opportunistic puck-moving defenseman who was comfortable using his backhand, which is exactly what Svozil revealed during an impressive power-play shift in the second period. The Czechs were out-shot 26-7 from the middle of the second onward, so Svozil did a fair amount of running around in his own end. He was used in all situations and wasn’t on the ice for any goals scored — for or against — and his 15:43 was the lowest among the Czech’s top six defensemen.

LW Oskar Olausson (SWE): The youngest skater on Sweden’s roster, Olausson before the tournament wasn’t expected to see the kind of ice time he’s accustomed to while playing in the J20 Nationell, so his 10:55 of ice time in Saturday’s blowout win is understandable. The beauty of his low-maintenance game, however, is that it’s driven by effort and impressive anticipation. Olausson doesn’t need good linemates or prime zone starts to make a shift impactful either on or off the puck, and you saw that several times in his 20 shifts. He finished with four shots, yet it could have been more had his ice time not been cut during garbage time in the second half of the third period.

#WJC: Nice step-up and then a keep by LHD Albert Johansson (DET 2nd/2019) sandwiched in between some moves and a chance by LW Oskar Olausson. #2021NHLDraft pic.twitter.com/eOsrZoCizB

Czech Republic (0-1-0): It goes without saying that Saturday’s loss was nothing short of an embarrassment for the Czechs, who entered the game with high hopes following an impressive blowout win of their own during exhibition play. Nick Malik wasn’t entirely at fault when you consider the disparity in shot attempts, but his days as the No. 1 goalie are probably over. And although the Swedes are medal contenders loaded with premier NHL prospects, they were slightly outplayed by the Czechs for about a period and a half. That should be the lone positive being reiterated as the Czech Republic prepares for their next two matches — the Russians on Sunday and the Americans on Tuesday. If the defeat to the Swedes was an indication of their chances in those upcoming matches, then the Czechs should simply save their energy and efforts for the group-play finale against the Austrians on Dec. 31.

Sweden (1-0-0): The Swedes preliminary-round winning streak increased to 53 games and should survive after playing the Austrians on Monday. Remember those concerns about Sweden’s lack of center depth in comparison to other medal contenders? Well, three of them scored goals on Saturday, including critical tallies from Arvid Costmar and Albin Sundsvik. There’s no question that the strength of this Swedish squad is equally distributed between the goaltending, the defense (Philip Broberg had three assists), and its snipers. But getting production from the center ice position is why you saw a competitive game against a formidable Czech defense turn into a laugher. Notable stars Lucas Raymond and Alexander Holtz were limited to just one power-play assist for Raymond, yet the Swedes still won by six goals.

Dylan Cozens tallied six points and was one of five Canadians to register a multi-goal game in a 16-2 annihilation of a depleted German roster. The Canadians jumped to a 2-0 lead early in the first period on goals from defenseman Kaiden Guhle and Dawson Mercer, with Mercer’s strike coming short-handed after a misplay by German goalie Arno Tiefensee.

Canada’s lead was halved temporarily later in the first by Germany’s J.J. Peterka during a five-minute power play that resulted from a head shot delivered by Canada’s Braden Schneider. But that would be as close as Germany would get as a Canadian attack that features 19 first-round NHL draft picks delivered an avalanche of offense that made the score 11-1 after only 40 minutes.

#WJC: Another gaffe from Tiefensee as he loses his footing on a simple dump-in and Dawson Mercer (NJD 1st/2020) stuffs home a short-handed goal. Canada up 2-0 over Germany in the 1st pic.twitter.com/shmuYjAqg7

Canada (1-0-0): Opening the preliminary round with three consecutive matches against doormats is one of the rewards for winning the previous year’s tournament and earning a spot in the “easier” group, so expect business as usual for the Canadians when they meet Slovakia on Sunday and the Swiss on Dec. 29. Neither the Slovaks nor the Swiss aren’t dealing with manpower issues like Germany,  and both have solid defense corps to reduce the liklihood of a near record-setting blowout. The keys for Canada are to remain healthy and continue to develop line chemistry as they prepare for their first test against Finland on Dec. 30.

Germany (0-2-0): It’s easy to feel sorry for the Germans and their COVID-related roster depletion, but try to remember that they were expected to be at or near the bottom of Group A before the tournament began. They’ll have to do a little scoreboard watching in terms of the medal round and hope that the Swiss don’t pick up a win over either of their next two opponents. But the first tiebreaker in group play is head-to-head result, and Germany should have their complete roster available for the Dec. 30 match against Switzerland.

Matthew Boldy had a hat trick and Trevor Zegras added two goals and two assists as the United States clubbed Austria 11-0 on Saturday night. The Americans, who finished with 73-10 advantage in shots, didn’t solve Austrian goalie Sebastian Wraneschitz until late in the first period when defenseman Drew Helleson’s knucke-ball feed towards the net flubbed over the goal line with 4:29 remaining. The U.S. exploded for six goals in the middle frame to break the game open, with Boldy and Zegras scoring two goals apiece. Brendan Brisson also scored twice, and Brett Berard, John Farinacci, and Sam Colangelo also found the back of the net. Alex Turcotte registered a game-high three assists.

C Matthew Beniers (U.S.): Beniers dictated the pace of his shifts for the second straight game and saw an increase in ice time from 16:16 in the opener against Russia to 16:36 versus the Austrians. He made a perfect feed to Matt Boldy to finish off a 2-on-1 and went 9-for-17 on faceoffs. It’s obvious that Beniers is ensconced in Team USA’s top-six and the chemistry he has with Boldy and Cole Caufield makes his line as formidable as the Zegras-Turcotte-Kaliyev trio.

U.S. (1-1-0): This team seems to have recovered from that disastrous second period in Friday’s loss to Russia, and one can say that their dominant third in that defeat helped pave the way for the blowout in against the Austrians. Head coach Nate Leaman opted to go with Dustin Wolf in goal midway through the Russian game and it’s worked thus far — Wolf has stopped all 21 shots he’s faced over a game and a half, and Team USA has outscored opponents 13-0 in that span. They have two days off before meeting the Czechs on Dec. 29.

Austria (0-1-0): The Austrians may have fallen victim to an angrier U.S. squad that potentially could have overlooked the underdogs had the Americans beaten Russia on Friday. What they got instead was a steamroller with something to prove, which one of several reasons this game from a possession standpoint was one of the worst beatdowns in World Juniors history. The Austrians probably accepted the fact that the other nations viewed them as cannon fodder well before the tournament began, but they are a proud bunch who should perform better despite having Sweden and Russia as their next two opponents. Based on the way the Czechs lost to Sweden on Sunday, there’s a chance their meeting with the Austrians on Dec. 31 will determine Group B’s final medal-round seed.