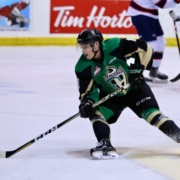 A prolific scorer with speed who can play a heavy game, Prince Albert’s Ozzy Wiesblatt is one of the top WHL prospects for the 2020 NHL Draft. He finished second on the Raiders in scoring with 70 points in 64 games and played both center and wing in his draft season