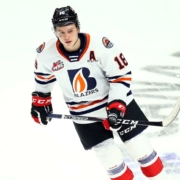 Kamloops two-way center Connor Zary is one of the top prospects from the WHL for the 2020 NHL Draft. A star for Team Canada at last year’s under-18 world championship, Zary’s third season in the Dub was his best, as he finished fifth in scoring with 86 points.