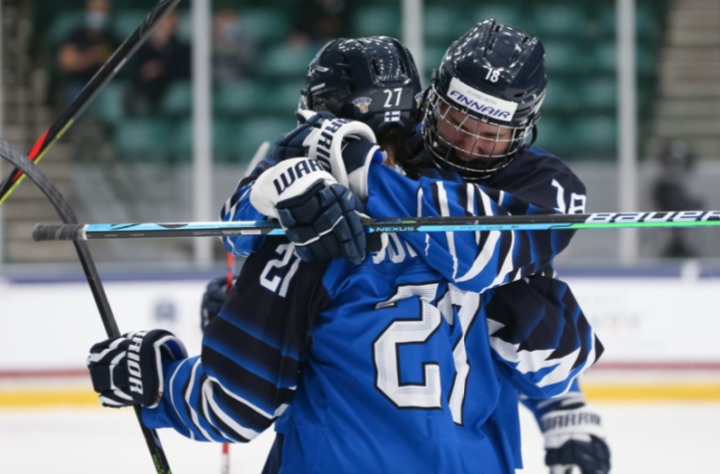 NASHVILLE (The Draft Analyst) — Samu Tuomaala scored the tying goal late in the third period and goalie Aku Koskenvuo stopped all four shootout attempts as Finland rallied to beat Russia 4-3 on Tuesday night at the under-18 world hockey championship.

Finland (1-0-0), which scored twice in a 69-second span in the closing stages to erase a 3-1 deficit, played as good a 65-minute game as one could have expected. Their hard-working effort is reflected in Finland’s impressive 55-28 advantage in shots over a Russian team which on Monday rallied themselves to beat the United States in overtime.

In spite of the significant advantage in zone time and shot attempts, however, the Finns were also misfiring on quality scoring chances and were not getting help in the puck-luck department. It wasn’t until under three minutes remaining in regulation when they began their comeback, with left wing Ville Koivunen putting back a rebound and Tuomaala hammering home the equalizer with 1:26 remaining.

The two nations played a scoreless overtime session but Finland had a pair of 4-on-3 powers plays that Russia (1-0-1) killed off. Verner Miettinen and Koivunen both scored highlight-reel goals in the shootout, and Koskenvuo clinched the victory with a stop on Danila Yurov. Koskenvuo finished with 25 saves.

Unlike their Nordic rivals from Sweden which struggled in Monday’s win against the underdog Belorussians, Finland skated and executed a coherent game plan. By supporting pucks, chipping and chasing, and executing perfect timing plays during lengthy cycles, the Finns spent most of the game in the Russian end and received lengthy shifts from each five-man unit.

Nonetheless, the game was close throughout, with the Russians taking leads of 1-0, 2-1, and 3-1 before the start of the third period. The deficit was Finland’s own doing, however, as all three Russian tallies resulted from unforced errors by the defense.

Russia’s Fyodor Svechkov opened the scoring in the first period after he converted a 2-on-1 feed from Ivan Miroshnichenko. The Finns had controlled play up to that point but defenseman Jimi Suomi was stripped of the puck in the neutral zone that created Russia’s 3-on-2 counterattack.

Finland’s Samu Salminen’s tied the score 1-1 early in the second period after he redirected home a point shot during a lengthy possession. But  Russia retook the lead after a botched handoff behind the Finnish net between defenseman Viljami Juusola and center Oliver Kapanen allowed Nikita Chibrikov to fire one past Koskenvuo.

The opportunistic Russians increased their lead to 3-1 with 2:07 left in the second period when Svechkov converted a centering feed from winger Danila Yurov, who carried the puck up ice and maneuvered around Suomi to find Svechkov alone in the slot.

Most of the play up to that point had been in the Russian end, but Finland nonetheless trailed 3-1 after two periods before forcing the extra session. Finland, which recorded 16 shots in each of the first three periods, received a scare when captain Oliver Kapanen crashed head-first into the boards and was carted off on a gurney. Kapanen would not return and was later released from the hospital back to the team hotel.

Aleksi Heimosalmi, RHD (2021 Draft): There was a lot of hype surrounding Heimosalmi heading into this tournament, as he was both Assat U20’s No. 1 and one of the SM-Sarja’s top defensemen of any birth year. The Finns loaded their U18 blue line with a bunch of playmakers, but it was a little surprising to not see Heimosalmi on the first power-play unit (which was later rectified). The most important thing you have to realize about Heimosalmi is that he is an intense competitor. Yeah, stats this and stats that. Fine. But most of these top kids put up points in junior hockey only to hit a massive wall when tougher competition limits their scoring opportunities from 10-15 a game to only one or two. Heimosalmi doesn’t need inferior competition to make his presence felt, which is why it didn’t come as a shock to see him dictate terms on his own after the trailing Finns needed their bigger names to step up. He was physical any chance he got, including a quick counter after a powerful one-arm shove that knocked the dangerous and sturdy Danila Yurov off balance. Later in the match, Heimosalmi rode the 6-foot-2, 175-pound Daniil Lazutin into the boards to also separate him from the puck. Heimosalmi in another impressive sequence gapped up on strong winger Ivan Miroshnichenko at his line to force a turnover, then took the puck and weaved up ice for a wrister and a draw. Oh by the way, he tied Tuomaala with a game-high seven shots and drew the primary 5-on-5 assist when Koivunen put back the rebound of his hard wrister. Outstanding performance, and just wait until you see his nasty side.

Aleksi Malinen, LHD (2021 Draft): Few draft-eligible defensemen at this tournament can glide across the ice as well as Malinen, who outside of a three-game playoff against SaiPa played every second of his season in the elite SM-Liiga with last-place JyP. This stud easily ranks as one of the draft’s elite skaters, and you saw plenty of his attacking style throughout Tuesday’s match with Russia. His time as a regular for a struggling but young JyP squad has definitely helped him round out his game, especially in the physicality department. But positioning and one-on-one play with Malinen has always been hit or miss, and he ended up getting dangled by Chibrikov in the second period before Koskenvuo bailed him out.  On the puck, Malinen continued to show his zone-entry skills and how his speed and agility are both respected. He can come across like a loose cannon but he’s actually a smart player who can make creative plays off draws or when presented with open ice. Malinen didn’t see any significant time on the power play but that has more to do with Finland’s depth and the use of four forwards.

Samu Tuomaala, LW (2021 Draft): Tuomaala is one of my top-ranked Finns for the upcoming draft and he’s already done enough in two years with Karpat U20 to convince me he’s first-round quality. He’s a goal scorer through and through, but he once again showcased his quickness off the puck, hustle on the forecheck, and a seemingly undervalued physicality. The game-tying goal from the left circle that he drilled off the pass was pro level, but it should be noted that it was his fifth or sixth attempt from that spot, with a couple being of the low-percentage variety and one that went at least two feet wide. He also blasted Nikita Chibrikov into the boards, albeit a tad from behind. And I really liked the way he and Karpat linemate Ville Koivunen worked the puck around and kept splitting the seam during the power play. Tuomaala tied with Heimosalmi with a game-high seven shots and it actually could have been more.

Sami Paivarinta, C (2021 Draft): One of the key figures in Lukko Rauma U20’s title run in the SM-Sarja, Paivarinta deserves credit for taking a backseat on the U18 team after serving as Lukko’s No. 1 center. With the Finland 18’s, Paivarinta is on the third line and penalty kill, and he put on quite a display in the quickness, energy and forechecking departments. He isn’t very big (5-foot-9, 160 pounds) but he was a nuisance to Russian defenders all night. He didn’t seem the least bit intimidated by the amount of firepower his opponents could muster, and his selflessness was evident from start to finish. He supported pucks, helped out in board battles, and would even assist his defensemen behind the net. Don’t for one second think that Paivarinta is some waterbug or checker — he has legit vision and playmaking abilities but is simply tailoring his game to the role he’s been given.  He didn’t hit the scoresheet but he went 9-for-19 on draws and registered three shots.

Brad Lambert, RW (2022 Draft): There were several Finns who were dangerous on the puck throughout the match, but Lambert was the most obvious. He recorded two assists, including the primary on Tuomaala’s game-tying marker via a perfect seam pass. Time and again, Lambert would collect the puck in the Russian zone and take it for a skate without a shred of indecision or doubt. Having this kind of confidence helps during the cycle, but his elite edges and balance also made it easier for him to outlast pressure and eventually force them closer to their goal. There were a few times where Lambert was clearly puck hogging and took low-percentage shots into an opponent’s skates, but he proved in the third period that he will continue to keep his foot on your throat until there’s nothing left to do but beg for mercy.

Danila Yurov, C/W (2022 Draft): The Russians had problems dealing with Finnish pressure all evening and it became obvious that it would require an elite mind (or some luck) to break their stranglehold on the possession game. Yurov, who isn’t eligible for the draft until next year, was placed on the top line for this very reason, and it was he who made critical judgements under pressure that helped Russia jump out to a 3-1 lead they certainly didn’t deserve. Sure, he has a short stride and a wide base, but when you can deliver daggers as often as Yurov can, any mechanical issues in skating are rendered insignificant. Neither the Americans on Monday nor the Finns on Tuesday had an answer for him. He made two one-handed chips in the neutral zone that sprung Ivan Miroshnichenko and Fyodor Svechkov for the 2-on-o that Svechkov converted, then used a shoulder-check to take the puck from his own end into Finnish territory for a sweet dish on Svechkov’s second goal. Yurov now has a goal and three assists in the two toughest games for Russia in group play.