A true potential starting netminder in the making, Gaudreau tops the list of draft eligible goalies from the OHL. With a 6-foot-2, 160-pound frame his size is average, but it does not seem to affect his ability to cover the crease at all. Gaudreau’s athleticism is exceptional and his ability to track the puck is well above his peers on this list. He thinks the game at such a high level, and even if he can’t stay square to the shooter, he can quickly adjust thanks to a powerful push off his skates and athleticism to cross the crease with ease. Despite his size he does well to cover the top half of the net, but he can often overcommit to the butterfly and can be punished upstairs much like he was by Russia in the U18 Worlds gold medal game. His rebound control has continued to improve, but he will often kick a rebound out to an opposition player attempting to find one of his defensemen.

Stylistically he is similar to Carey Price. Calm, cool and collected is the mantra of Gaudreau’s game. Rarely out of position, he is one of those netminders who makes everything look easy. Much like the rest of the netminders on this list, Gaudreau was the victim of not playing many games this season due to the pandemic. Jesper Wallstedt and Sebastian Cossa will likely be the first two goaltenders off the board, partially due to the playing time they had in 2021. Even though Gadreau did not get any regular season action he still backstopped Canada to a gold medal at the 2021 IIHF U18 World Championship. He had an exceptional team in front of him, but he was named the tournament’s best goaltender for a reason. A slightly bigger frame than Gaudreau, Lennox comes in at 6-foot-3 and 198-pounds. His size doesn’t come at a sacrifice for athleticism as he is explosive on his skates and possesses exceptional reflexes and reaction speed. An adept puck handler, Lennox is calm under pressure and consistently makes the right decision with the puck on his stick. Like Gaudreau, Lennox’s lateral movement is excellent, and he reads the play at a high level allowing him to make difficult stops look easy. If there are any concerns, it centers on his consistency. When he is on, he can be almost unbeatable, however there are nights where his confidence just is not there, and everything falls apart. Tracking the pucks is not a strong point for Lennox and relies on his size and athleticism often. His rebound control could use work, but that should come as he improves his puck tracking and positioning.

Served as a backup for the Saginaw Spirit during his rookie season in 2018-19 and starred in the postseason when Ivan Prosvetov was suspended. His sophomore season saw him split the starting job with Michael Frappier and despite Saginaw finishing as one of the top teams in the league his individual numbers were not exceptional. An excellent 20-8-3 record was marred by a 3.63 GAA and .876 SV%. Whereas Gaudreau’s struggles can be explained by a poor Sarnia Sting team, Lennox does not have that to fall back on. He just missed out on representing Canada at the 2021 World Junior Championship, so unfortunately, we haven’t been able to see any development from him this year. 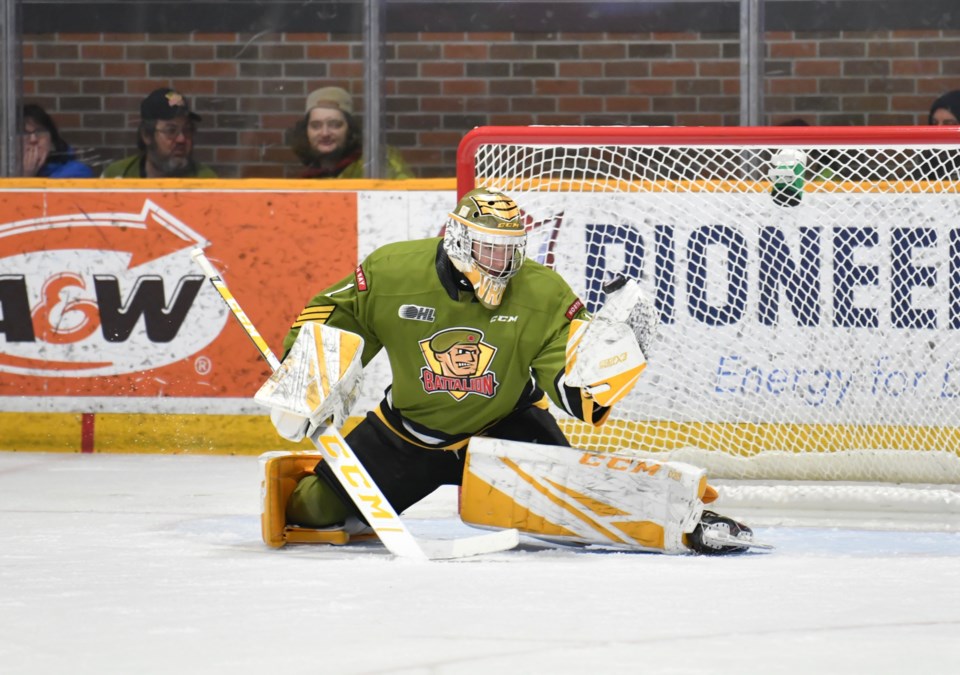 Another impressive rookie netminder, Vrbetic faced the same issues that plagued Gaudreau in Sarnia. Whereas Sarnia were the worst team in the Eastern Conference, the North Bay Battalion had the worst record in the entire league. He started to find his footing in the second half of the season prior to the cancellation, winning five of his final seven games including shutouts against Barrie and Kingston. His numbers were also marred by several blowout losses including eight games where he allowed six goals or more.

A giant compared to his peers, coming in a 6-foot-6 and 180-pounds, Vrbetic often plays how you would expect a netminder of his size to play, stiff and slow. He’s remains upright on his feet more than any goalie I’ve seen in a while. A long-term project, Vrbetic progressed as the season went on and his mobility significantly improved. It’s not surprising as he went from playing one game the season prior to 42 games in 2019-20. His rebound control improved, and he started to use his size to his advantage when squaring up to shooters and covering his angles. As for areas of improvement, he will have to get a little bit quicker in the crease and his decision making with traffic in front isn’t ideal as he can often get distracted from the play. 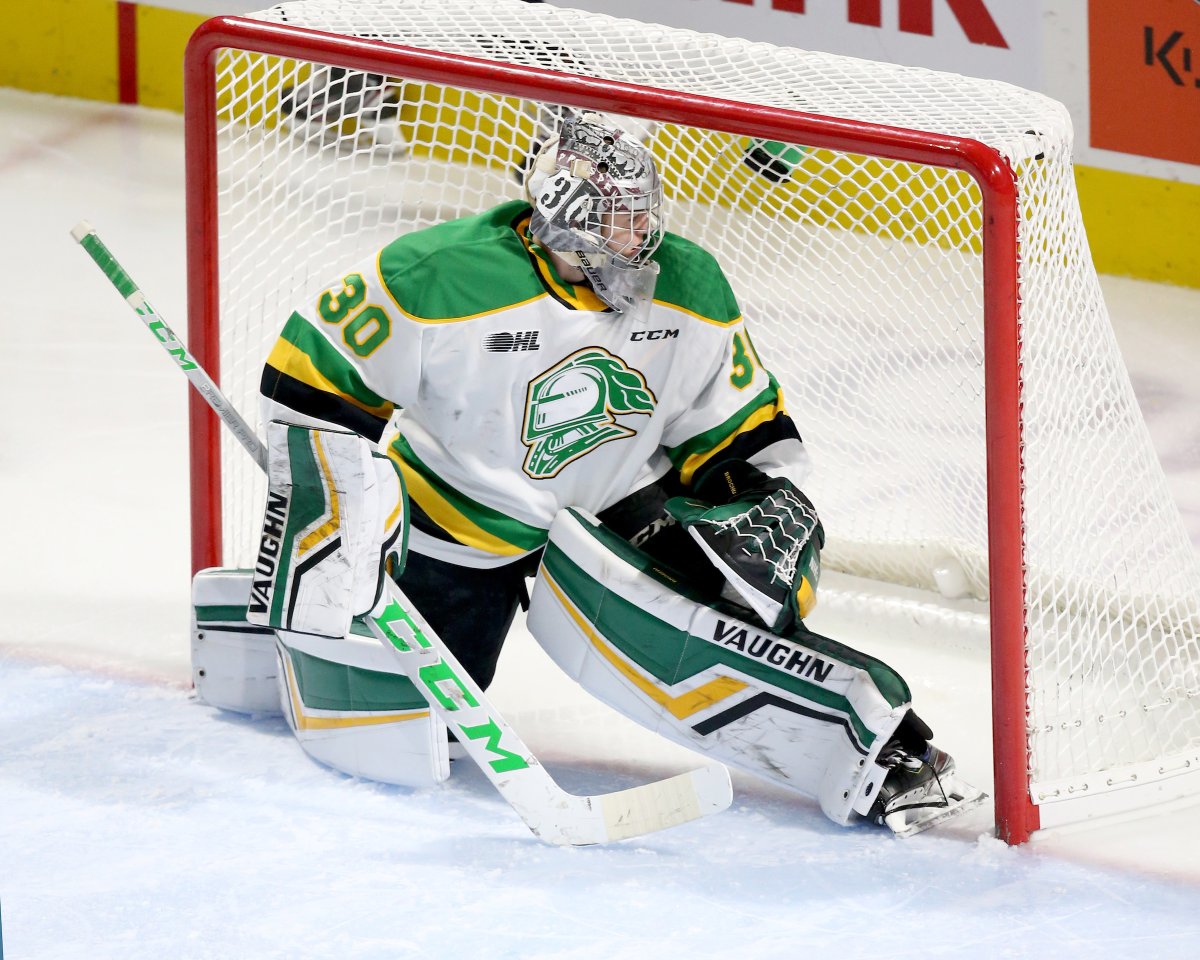 It’s not often you have a goaltender who had the season that Brochu had and not get drafted. He became the winningest rookie goaltender in OHL history after posting a 32-6-0 record for the London Knights, a record that had stood for the last 14 years. Not only that, but he was also among the league leaders in goals-against average, save percentage and wins. He had a few things going against him that likely turned teams away on draft day. He played for a superb London Knights team who were the clear second-best team in the league after the Ottawa 67’s. He was on nobody’s radar heading into the 2019-20 season after spending the season prior in Junior C with the Dresden Jr. Kings and he came in with a below average 5-foot-11, 161-pound frame. It is quite the story for the young netminder and even Hockey Canada took notice as he was one of the last cuts for the 2021 World Junior Championship squad along with Tristan Lennox.

There are only three NHL goaltenders under six-feet in the NHL right now; Juuse Saros, Anton Khudobin and Jaroslav Halak who all come in at 5-foot-11. Brochu stylistically compares well to all three of them with raw athletic ability and exceptional agility. In the mould of the modern-day butterfly goaltender, he tracks the puck well, has the speed to get back into position quickly and controls rebounds well. He’s also one of the better puck handling netminders in the class. Put his abilities into a 6-foot-2 frame and we are talking about a lock for the first two rounds of the draft. He has been practicing with the Wilkes-Barre/Scranton Penguins all season and struggled in his only game of the season, allowing five goals. Malik spent half the 2019-20 season with HC Frydek-Mistek in the Czech Republic before heading to the Soo Greyhounds in the OHL. His struggles with the Greyhounds were well documented and likely one reason why he went undrafted in 2020. It’s not the easiest league to transition to and he got more comfortable as the season went on, finishing with three impressive performances against London, Sudbury, and Flint. Malik is the third goaltender on this list who played on one of the four teams who failed to clinch a playoff spot. NHL Central Scouting has him listed as 6-foot, 180-pounds after coming in at 6-foot-1 last year. It’s not a major difference, but he is undersized compared to the other goalies in front of him on this list.

Extremely athletic, Malik can cover the crease with ease and possesses exceptional reflexes. His glove hand is probably the best among draft eligible OHL netminders and his butterfly technique is efficient and effective. However, despite a calm and composed manner in the crease, his movement can be classified as chaotic at times,and he will need to continue to work one his lateral quickness in hopes of becoming a complete netminder. He has had a strong showing back in the Czech Republic this season and put in a respectable performance at the World Juniors. He has areas he’ll need to improve in, but what he does well now warrants a selection this time around.