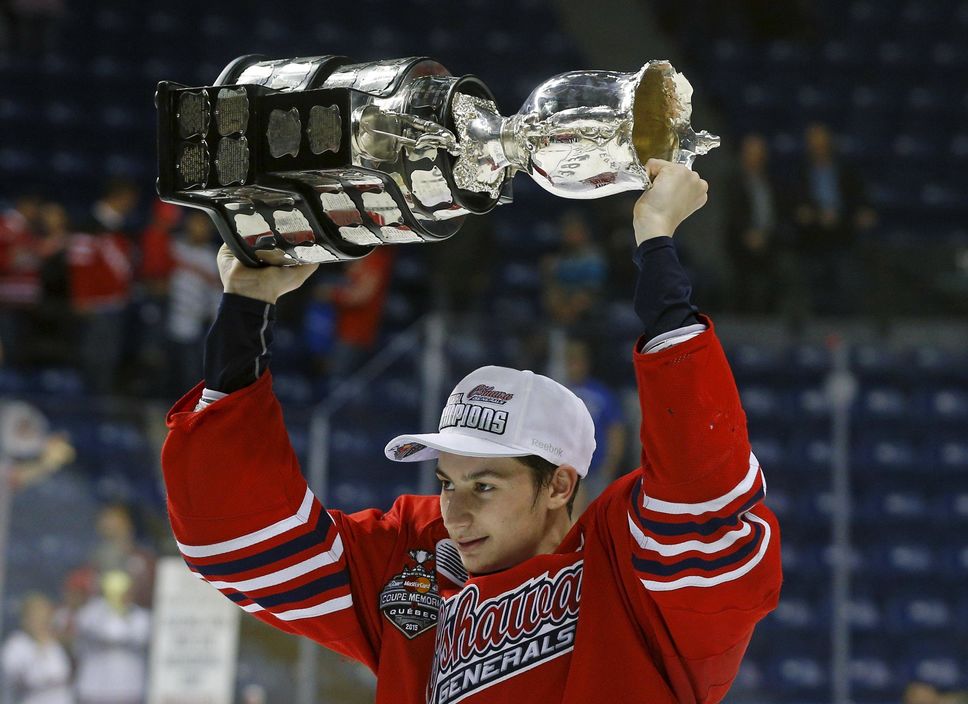 The Draft Analyst (New York) –Rookie center Anthony Cirelli scored two goals, including the game-winner 1:28 into overtime, as the Oshawa Generals outlasted the Kelowna Rockets, 2-1, to win their first Memorial Cup in 25 years.

The 17-year-old Cirelli, who is only a year removed from playing in the Ontario Junior Hockey League, sent Oshawa home as victors when he banged in a loose puck from the goalmouth past Kelowna’s Jackson Whistle early in the extra session, ending the 10-day tournament in grand fashion.

Cirelli’s snipe over Whistle’s glove off a 2-on-1 midway through the second period forced overtime for the Generals, who finished with a perfect 4-0 record in Memorial Cup play. They became the first team from Oshawa to win the Memorial Cup since 1990, when Eric Lindros and the Generals needed two overtimes to beat the Kitchener Rangers at the Copps Colliseum in Hamilton, Ontario.

Ken Appleby gave up the game’s opening goal to Kelowna’s Tomas Soustal with 4:52 left in the first but finished strong, ending up with 36 saves — the most he’s faced in the tournament. Whistle stopped 24 of 26 shots in defeat for the Rockets, who also dropped a 2-1 decision to the Generals in round robin play.  Leon Draisaitl, the third overall pick by the Edmonton Oilers in last June’s Entry Draft, was named MVP with a tournament-best seven points in five games.

Sunday night’s title game was the last game to be played in Quebec City’s infamous Le Colisee, which opened in 1949 and once housed the NHL’s defunct Quebec Nordiques. The city has been looking to lure a new NHL franchise since it lost the Nordiques to Colorado in 1995. The new Videotron Centre is being built next to the current site of Le Collisee, which will be demolished this year.