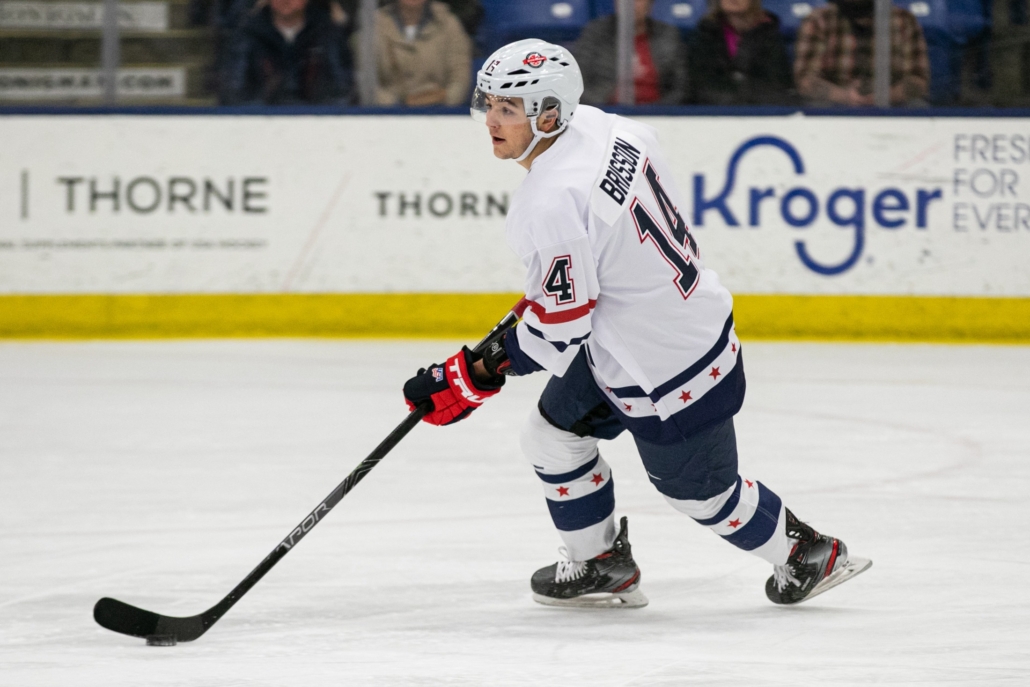 It took the Golden Knights only three years to establish themselves as NHL royalty, but please don’t forget about their farm system. Although it might take two to three more years before any of their kids get a prominent role on this Cup-hungry roster, the numbers say that having NHL-ready options from the prospect pool should help keep the Knights’ contention window wide open. And if there ever was a bright side to contending or losing in the conference finals, it’s that Vegas retained its first-round pick in each of the last two seasons.

The trend of drafting a center with their first pick occurred for the fourth time in four years. Last month, the Golden Knights used the 29th pick in 2020 on Michigan-bound pivot Brendan Brisson (pictured), who is the son of NHL super agent Pat Brisson. Brendan stated his case for a top-31 selection midway through the draft season by clubbing both the USHL and the international circuit at the under-20 World Jr. “A” Challenge. Smart hockey and consistent effort are hallmarks of Brisson’s game, but he also unfurls a howitzer off the pass to make him a go-to option on the power play. Vegas grabbed two more centers in high-school roadrunner Jackson Hallum and triple-overage Russian Maxim Marushev, plus defensemen Lukas Cormier and Noah Ellis in Rounds 3 and 6, respectively. Lastly, goalie Jesper Vikman at 125th overall makes it at least one netminder in each of their first four drafts.

Vegas sure loves drafting centers in the first round, as the Brisson selection makes it four of five in the Knights’ brief history. To their credit, they certainly have good taste, as Brisson was a key cog in a deep Chicago attack that always received shift-to-shift consistency from arguably their top forward. He’ll probably stay at the NCAA level with Michigan for at least two or three seasons, and the aforementioned center depth within the organization should keep the pressure off him as he bulks up and develops his overall game.

Cormier’s draft season took a turn in the opposite direction from Brisson, as he was a preseason first-rounder and U18 Ivan Hlinka participant until an injury limited his draft year to only 44 matches. When healthy, Cormier is a disciplined puck manager and power-play quarterback who delivers accurate passes and can execute clean breakouts using several methods. He’s listed at 5-foot-10 and 180 pounds so you can technically call him undersized, but Cormier doesn’t shy away from contract and shows a high level of competitiveness.

One of the fastest centers available, Hallum was the straw that stirred St. Thomas Academy’s drink as they marched towards another Minnesota state tournament. Not only did this Michigan-bound pivot center the Cadets’ top line, but Hallum also was deployed to the lead power-play group and primary penalty-killing unit. His skating is a thing to behold, but Hallum moves swiftly in all directions and isn’t always playing at 200 miles per hour. Hallum is a confident and reliable puck handler who has the smarts to slow things down when necessary and use his tight-quarter quickness to create issues in the opposing end. An additional thing to consider is that he was never rated by Central Scouting in any of their rankings but ended up going in Round 3. Clearly the Knights’ scouts took notice when others wouldn’t, and it could end up delivering a huge payoff.

This was a confusing pick because at no point last year or during the start 2021-22 did the 6-foot-3 Vikman ever appear as one of the top netminders in either of the J20’s conferences. In fact, Vikman was playing some of his worst hockey during the stretch leading up to the draft, although it’s likely the Knights became enamored with him well before. It’s reasonable to think that all goalie guru’s look at every teenager between the pipes as blank canvases, which could therefore make any deficiency look fixable. But Vikman seems to get frustrated early into games and it ends up plaguing him throughout an entire match. Whether it’s a mechanical issue or breakdowns in focus or tracking, Vikman has plenty of work to do before one can consider him a legitimate NHL prospect.

One of the traits associated with those labeled as “project defensemen” is a lack of consistency on the puck, which is the only thing that prevented this UMass-bound blueliner from going higher than late in Round 6. Ellis is a kid who was on the 2020 draft radar for quite some time, but his play with the USHL’s Des Moines Buccaneers was not in line with his performances at bright-spotlight events such as the Ivan Hlinka tournament and the All-American Prospects Game. On one hand, Ellis is confident and clean with his puck management and can be counted on to breakout on his own while limiting rushed decisions to only during emergency scenarios. There is no doubt in my mind that Ellis playing at peak performance during at least 75 percent of a given game would have had scouts from all 31 teams salivating at the chance at drafting him. He’s now Vegas property, however, and four full years at Amherst should be plenty of time for Ellis to develop consistent reliability and maintain a reputation as a legitimate scoring threat.

One of the things that makes this draft process a roller coaster ride is getting blown away by a kid in his first year of eligibility, only to see his name skipped over once the big weekend arrives. In Marushev’s case, I was pumping his tires for three straight years before calling it quits this season, which turned out to be Marushev’s best one as a young VHL center. He’s got speed and is an effective 200-foot forward who has been summoned by his national federation to play at multiple prospect tournaments. Vegas has not been shy about drafting from Russia — Marushev makes it three in the last three years.

Agree. You can make a case for all three of Yurov, Miroshnichenko, and Perevalov to go in the top 10, maybe even top five.

Danila Yurov with a good game today as Stalnye Lisy edged a pesky Belye Medvedi 5-4 in OT. Centered the top line and tallied a neat primary assist on the 2-0 goal and scored from in tight to make it 3-0. Later shifted to wing on Kvochko's line and showed their typical chemistry

Trikozov looks the best, Perevalov plays the best, Miroshnicheko projects the best, if that makes sense.

When Miroshnichenko & Trikozov were VHL teammates I found it easy to see the former was the better player. Used more, scored more, enagaged more. One stayed, the other didn't

I also can't consider a draft average when it's loaded with North American centers.

Has an NFL draft loaded with QB's ever been called average?

I can never consider a draft class average when the NTDP has 6-9 potential 1st-round picks, including a possible 1st OA, plus strong Swedish & Russian groups. That in it self pushes several quality CHL, U.S, & Euro kids into Round 2, which is how I determine "first-round quality"