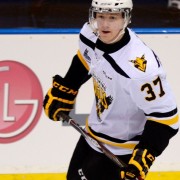 Evgeny Svechnikov
Position: Center/Left Wing
Shoots: Left
Height/Weight: 6’2, 199 lbs
Born: October 31, 1996,  Neftegorsk, Russia
Central Scouting Rankings (Prelim/Mid/Final): “B” / 21st NA / 17th NA
Summary: Another big, skilled forward who can take over a game, Svechnikov is a sniper who thrives in open-ice. He possesses a combination of skill and power similar to fellow CHL’er Pavel Zacha, only Svechnikov is a slightly better playmaker. He can play both wing positions as well as center, but his goal-scoring abilities makes him better suited for one of the flanks. That doesn’t mean he isn’t capable of playing the pivot — he most certainly can, and is actually quite responsible in his own end for an offensive forward. He’s a very good skater with speed and acceleration, and can release a quick or heavy shot off the rush or standing still. A gifted scorer who can score from an assortment of shots, Svechnikov also owns a pair of very soft hands, which helps him corral tough passes and is extremely quick at transferring difficult or inaccurate passes onto his stick blade and into shooting position.

Vili Saarijarvi
Position: Defenseman
Shoots: Right
Height/Weight: 5’9, 166
Born: May 15, 1997, Rovaniemi, Finland
Central Scouting Rankings (Prelim/Mid/Final): “C”/ NR/ NR
Summary: Converted forward who produced a solid wire-to-wire season for the Gamblers but boosted his draft stock at the 2015 U18’s with confident play and production as Finland won the silver medal. Rumored to be heading to Flint (OHL) in the Fall, Saarijarvi is a gifted puck mover and playmaker who likes to battle, but it was his daydreaming in the crease which allowed the critical tying goal to the U.S. in the title game. The position seems new to him, and while he is strong on his skates and doesn’t shy away from contact, he tends to force plays under duress, where his physical shortcomings become a distinct disadvantage. Nevertheless, Saarijarvi works wonders when partnered with skill players, so you can why the Red Wings took a stab at him much higher than expected.

Joren Van Pottelberghe
Position: Goaltender
Height/Weight: 6’2, 187 lbs
Catches: Left
Born: June 5, 1997, Zug, Switzerland
Central Scouting Rankings (Prelim/Mid/Final): “C”/ 11th Eur/ 5th Eur
Summary: Hit-or-miss Swiss netminder with an NHL build,  Van Pottelberghe is very raw in terms of technicality but he can certainly be worked with. He is not quick on his feet, nor does he possess a particularly quick glove hand, and more times than not, he’s stapled inside the blue paint. Is there any good news? He’s actually at his best during the Mad Minute, when mayhem is surrounding him in the crease area. Van Pottelberghe is pretty athletic and acrobatic for a kid his size, but he simply gets beat too often from the flank and high-slot areas. More of a long-term development project than almost all netminders drafted in his class.

Chase Pearson
Position: Center
Height/Weight: 6’2, 189 lbs
Catches: Left
Born: August 23, 1997, Cornwall, ON
Central Scouting Rankings (Prelim/Mid/Final): “C”/ 170th NA/ 123rd NA
Summary: Power forward with NHL bloodlines (father Scott Pearson was the sixth overall pick in 1988) who was a power play specialist for a stacked Youngstown team but struggled to score at even strength. Committed to the University of Maine after rumors he was headed to the OHL.

Patrick Holway
Position: Defenseman
Shoots: Right
Height/Weight: 6’4, 200 lbs
Born: October 1, 1996, Cohasset, MA
Central Scouting Rankings (Prelim/Mid/Final): NR/ NR/ NR
Summary: A physical shut-down defender with skill who’s headed to the USHL and then to the Maine Black Bears in 2016-17, Holway was an excellent pick considering the round and his upside. Holway played both hockey and lacrosse at Boston’s BC High, but emerged as a lacrosse star after transferring to Cohasset to play long stick middle. On the ice, he plays an active and engaged style, and does not shy away from making plays with the puck. He projects as a middle-pairing, penalty-killing role despite having soft hands and the ability to make plays under duress. His strength, hand-eye coordination and mobility makes him one of those rare blueliners who can combine both physicality and creativity into a unique and certainly useful package.

Adam Marsh
Position: Left Wing
Shoots: Left
Height/Weight: 6’0, 160 lbs
Born: August 22, 1997, Chicago, IL
Central Scouting Rankings (Prelim/Mid/Final): NR/ 42nd NA/ 55th NA
Summary: Chicago native who had a solid rookie season until a high ankle sprain in March. Finished fourth among QMJHL rookies with 24 goals, 20 of which were at even strength. Marsh has tremendous speed and a quick first step, but his inability to make plays and finish with regularity in an offense-happy circuit like the QMJHL  are some of the reasons he fell to the seventh round. He can kill penalties and serve a myriad of positions for any coach as a fill-in type, and the kind of dedication he exhibited towards reinventing himself as a multi-situation contributor will help him get jobs at higher levels.